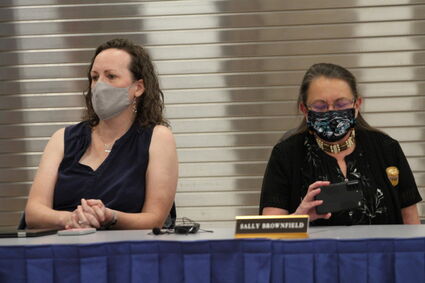 From left, Sally Karr and Sally Brownfield – shown at the Shelton School Board's only in-person meeting in the last 18 months in August at Mountain View Elementary - presided over their last meeting with the board Nov. 23 after serving for six years.

Sally Brownfield and Sally Karr bid farewell to the Shelton School Board after serving for six years.

The Nov. 23 regular meeting was the last for the two Sallys. At that meeting, Marilyn Stevenson of the Mason County Auditor's Office swore in new members Marilyn Ward and Matthew Welander, and swore in Marty Best for a new four-year term.

Brownfield and Karr received praise for their six years on the board.

"I want to give a heartfelt thanks to both Sallys, Sally Karr and Sally Brownfield,...