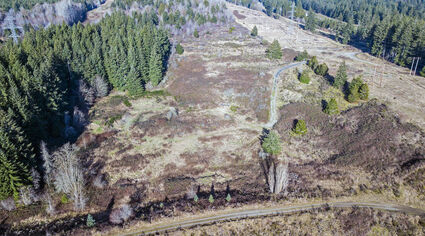 The state Department of Ecology seeks input on its proposed cleanup plan for the city's former C Street dump, a 16.7-acre site the city bought in 1928 to use as a municipal landfill until 1974.

Tuesday is the deadline to comment on the state's proposed cleanup of the city's former C Street dump.

The state Department of Ecology's draft cleanup plan calls for adding a soil cap to the site to cover the landfill waste to prevent contaminants from coming into contact with people and animals. Fencing, a gate and signage would be put in place to warn visitors of the site to the west of downtown Shelton, north of Goldsborough Creek and south of the proposed Shelton Hills development.

The DOE has given the city almost $2 million in grants to perform the remedial investigation, the feasibility study, the draft cleanup action plan, and implement the cleanup.

The cleanup documents are available at https://apps.ecology.wa.gov/gsp/sitepage.aspx?csid-2295. To submit a comment to DOE, go to http://tcp.ecology.commentyinput.com/?id=uQCCja.

The DOE states that once the engineering design and construction begins, the cleanup probably will take less than a year to complete.

Private owners mined the 16.7-acre site for sand and gravel before the city bought the land in 1928 to use as a municipal landfill until 1974.

The former Rayonier pulp mill and research laboratory dumped byproducts and demolition debris at the landfill. The city deposited sludge from its wastewater treatment sites.

Between 1976 and 1981, wastewater treatment sludge containing ash from Simpson Lumber Co.'s Shelton mill was dumped at the site.

On July 2, 1986, two Washington State Department of Ecology inspectors visited the C Street dump. In their inspection report next to the category type of treatment system, they wrote "none"; under the type of facility, they wrote, " 'closed' dump."

That's because the facility was supposed to be shut down at that time.

When it came to grading the operation, the inspectors marked an X on the box "unsatisfactory."

In 1987, the city hired an environmental consulting firm to provide guidance and alternatives for closing the landfill. The draft report that followed recommended evaluating access to the site, covering the waste disposable area with soil, and perhaps monitoring the groundwater.

Thirty-five years have passed since that recommendation.

These days, anyone can still walk around the gate in front of the church to the overpass that crosses U.S. Highway 101 and wander on the former dumpsite; no fences have been erected, and no signs indicate the landfill ever existed.

In 2015, the DOE made the city responsible for cleaning up the site. The DOE

provided the city with funding for the cleanup of the landfill through the Toxics Cleanup Remedial Action Grant. The agreement required the city to complete a remedial investigation and feasibility study, and draft a cleanup plan.