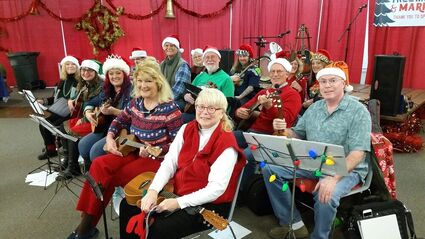 The Shel-Town Strummers perform at the Holiday Magic event from 6 to 8 p.m. Dec. 3 and 4 on West Railroad Avenue in downtown Shelton.

Daryl White was a teenage guitarist when he saw Elvis Presley play a ukulele in the movie "Blue Hawaii." He bought a cigar box ukulele for $90 at an outdoor bazaar in Olympia.

"I learned the ukulele in about five minutes," he said.

Barbara Gomez mastered her first three chords on a $26 soprano ukulele. Joel Myer grew frustrated with his first model, but became hooked with a better model and now owns 26.

"It's an accessible instrument, but it's also an accessible sound ... It's not threatening – it's a welcoming happy sound," Meyers said.

White, Gomez and Meyers will be playing the instrum...