Waste flown out of park 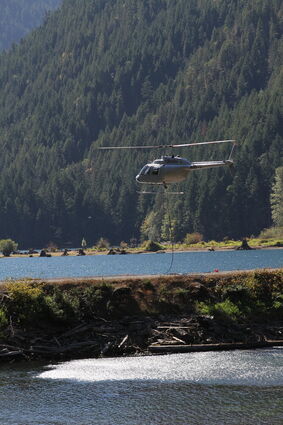 On Friday, a helicopter pilot transports a 50-gallon drum of human waste from a Romtech toilet from an Olympic National Park trail to the causeway at Lake Cushman, where ONP personnel were waiting.

Hikers in the Olympic National Park use 92 "privies" to relieve their bodily functions, 72 of them pit toilets.

The other 20 are eight vault toilets and 12 Romtech toilets, which are emptied once a year. On Thursday and Friday, a helicopter pilot transported 50-gallon drums of human waste from Romtech toilets and entire vault toilets from Olympic National Park trails to the causeway at Lake Cushman, where ONP personnel were waiting. The causeway was closed to traffic during the operation.

The facilities at Flapjack Lakes and Lena Lake were among those emptied.

Park employees hiked to the si...