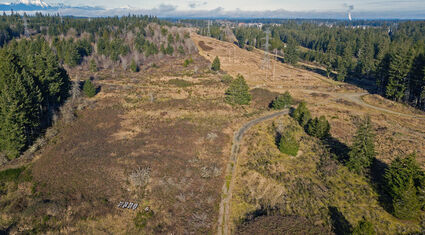 The City of Shelton's former C Street landfill is located west of downtown Shelton and U.S. Highway 101, just south of the site for the proposed Shelton Hills development.

The public has one month to comment on a proposed cleanup plan for the city's toxic former C Street dump after the Shelton City Council on Tuesday approved a new agreed order with the state Department of Ecology.

The proposed plan, created by the city and Aspect Consulting, calls for laying down liner on the site, covering it with a low permeable cap of clay-like soil, installing fencing and signage and creating a monitoring plan. The council gave preliminary approval for the plan at its Sept. 7 meeting.

Everyone has the opportunity to check out the proposed plan at the counter of the city's planning department at the Shelton Civic Center, said Jay Harris, the city's public works director. The comments will be forwarded to the state DOE, which will draft the final agreed order and submit it to the city for approval, he said.

The city will seek grant money to pay for the cleanup, Harris said.

In 2015, the DOE mandated that the city present proposed plans to clean up the site west of downtown Shelton and U.S. Highway 101. For decades, the city, Simpson Lumber Co. and other businesses dumped toxic materials at the site.

In the agreed order with the state, the city is required to look for the types and extent of the contamination; explore cleanup options; and propose cleanup actions through a draft cleanup plan. The first draft cleanup plan was submitted to the DOE a year ago.

Private business owners mined the site for sand and gravel before the city bought the land in 1928 to use as a municipal landfill.

The former Rayonier pulp mill and research laboratory dumped byproducts and demolition debris at the landfill. The city deposited sludge from its wastewater treatment sites. Between 1976 and 1981, wastewater treatment sludge containing ash from Simpson Lumber Co.'s Shelton mill was dumped at the site.

In 1981, the Mason County Health Department instructed the city to stop dumping contaminated sludge at the site and to submit a plan to fence the site or otherwise limit access. But the dumping continued until at least 1986. One of the concerns is that dioxins in the soil will find their way into the nearby Goldsborough Creek.

In 2015, DOE stated the city is responsible for cleaning up the site.