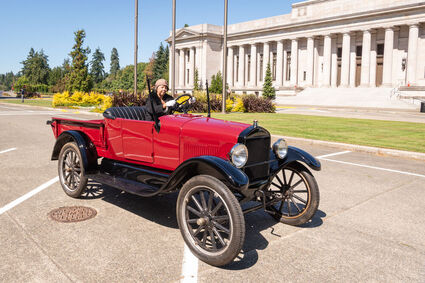 A 1927 Model-T pickup truck is displayed during the Washington State Patrol's 100-year anniversary at the Capitol Campus in Olympia on Sept. 1.

The Washington State Patrol celebrated their 100th anniversary Sept. 1, with a ceremony at the Capitol Campus in Olympia.

The ceremony included WSP Assistant Chief Marc Lamoreaux speaking about the history, where WSP is now and where it's going in the future. Chief John Batiste was unable to attend the ceremony. There was representation from several different patrol cars through history, including a 1951 patrol car, a 1949 paddy wagon and brand new patrol cars and motorcycles. There was a squad rescue truck, a side-by-side and a go-kart. The vehicles were included in a parade around the fl...