When you see berries 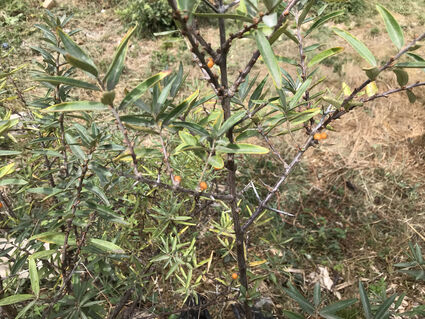 Since nature abhors a vacuum, I replace whatever I can with something discharging a similar function. On my property that means subbing out a lot of red alder.

These pioneer trees are enriching cleared soil for western cedar, Douglas fir, western hemlock and bigleaf maple. Red alders fix nitrogen from the atmosphere so that adequate resources for forest succession will exist when they fall over or rot away from multiple alder borer wounds.

All this rotting and falling can be dangerous, but the nitrogen stores must not be allowed to flag. As I push alder back from the forest edge, I've planted seaberries (Hippophae rhamnoides). Their multistem growth habit has given them more stability and flexibility, plus the potential to be espaliered into thorny hedgerows.

In so doing, I was uncertain whether they would bear fruit. I knew them from Vermont, where they are foundational in Ben Falk's permaculture restoration of exhausted dairy land.

Seeing that they are used in British Columbia for shelterbelts and erosion control, I lucked out in finding an auction lot of them at a reasonable price. Such volume gave me freedom to experiment.

I had been warned by a former employee of Burnt Ridge Nursery that they would need a couple of years of watering to establish through our Mediterranean summers. Many died in both clay and sandy soils to certify that absent mulching and soil amendment, they cannot persist through the South Sound's long dry spell.

Survivors have died back to the roots but returned with gumption. In digging up dead ones, I found nitrogen-fixing nodules on the roots of even the youngest trees - so I stopped digging them up. Better to let that nitrogen time-release into the soil as the dead trees rot in place.

In all this I hoped that the sour, abstractly tropical berries would appear. Seaberries are dioecious, meaning that each tree bears male or female flowers. Only females will bear fruit, and it's impossible to tell the difference when they're only 2 to 3 years old.

Sure enough, a smattering of berries filled out on several trees in 2021. These ranged in color from neon orange to dull red, and tasted on a spectrum bookended by raspberries and papayas or pineapples, but always very tart. They are rich in A, C and E vitamins, and the seeds offer the added benefit of omega-3 fatty acids.

Birds show no interest in them. Deer are put off by the 2-inch thorns that festoon every branch. The leaves reportedly make an earthy and health-promoting tea, but I have never had time in June to harvest leaves from the male plants. This year I plan to collect some leaves from the females, which have finished their fruit production in late summer and have resources to spare.

I had been warned that suckering is a concern, but have only seen this where seaberries are watered consistently and heavily. In two years, I have seen five suckers, always capitalizing on water availability.

Like bamboo, if they are not irrigated and fertilized over the summer in South Sound, it seems unlikely they will spread. Because spreading could be an asset for soil retention, so I have one cluster on a steep bank that's regularly supplied by drip lines in hopes that it will supplant some collapsing alder.

Harvesting the berries in any volume is said to be a chore, and partially explains why we only see these for sale from countries where labor is cheap. I expect to have more to say about that next year after celebrating my first micro-crop with food and drink for the seaberry trees.