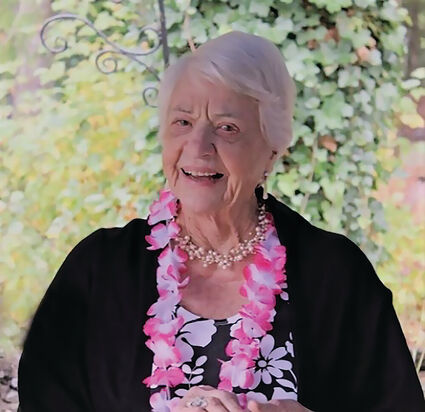 On November 16, 2022, Barbara Fowler Childs "Bobbye" passed away peacefully of natural causes at Providence St. Peter Hospital in Olympia, WA. She was 92 years old and had lived a grand life full of love and adventure.

Born in Danville, Virginia, March 18, 1930, Bobbye adored her southern roots. She traveled worldwide with her husband Richard whom she married December 23, 1951. In June of 1952, Bobbye graduated from Mary Washington College of the University of Virginia with her bachelor's degree. She went on to teach History and English, and was a favorite substitute teacher wherever she went. Bobbye's happiest times were spent entertaining friends and family, cooking fabulous dishes for everyone who came to her home, playing golf, playing bridge, painting and quilting, playing the piano, reading, and basking in the sun on the beaches of Hawaii. She and her husband Richard worked tirelessly to provide opportunities for their four children, and they travelled together visiting many countries internationally. Bobbye and Richard settled on Harstine Island in the 1980's and lived there until Richard's passing in January, 2017. On the island, Bobbye was active with the community and participated in the many local events, theater, Women's Club with her wonderful island friends. She moved in 2018 to Olympia, and she made many friends in her new apartment complex. Bobbye's southern charm and hospitality endeared her to many. Her bright smile, sassy wit, and wonderful laugh will be missed among all of us who knew and loved her.

Bobbye was predeceased by her husband of 65 years, Richard V. Childs. She is survived by her brother Calvin Fowler of Richmond Virginia, and her four children; Jake (Christiane) of California, Chris of Colorado, John (Barbara) of Lynnwood, Washington, and Lee of Shelton, Washington. Bobbye is the proud grandmother to six grandchildren, and four great-grandchildren.

We will have a celebration of life on Harstine Island in March, 2023 to celebrate her birthday and allow us to gather in her memory.