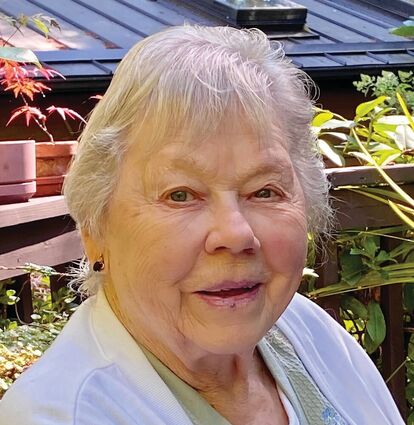 Irma Jean McPherren passed away peacefully at home in Hoodsport, Washington, with family by her side on November 2, 2022, at the age of 96.

On January 29, 1926, Jean was born to Ellen and Otis Cordell in Willits, California. When the family moved to a farm in southern Iowa, she attended a one-room schoolhouse and performed the rigorous daily chores of farm life. She was ten years old when her mother's death from appendicitis left her to help raise her younger siblings, Robert and Lois, and later, after her father remarried, her baby brother, Don.

In high school, despite her petite stature, Jean earned a varsity letter in girls' basketball. "At 5' 3", I wasn't exactly the tallest player on the team, but I played my heart out," she would say, adding with a laugh that she learned to be quick. She met Merle Alvin McPherren during World War II while the charming sailor was home on leave. He soon shipped out, and after a slew of love letters and handful of dates, the couple joined in a marriage that lasted until Merle's passing nearly fifty years later.

During life's journey together, they held a variety of jobs and followed career opportunities to California before ultimately settling in Washington, where they raised their three children: Dennis Lee, Kenneth Steven, and Linda Sue. At the couple's summer home in which they retired, amid the beauty of Lake Cushman and fondly dubbed the "cabin," Jean spent the remainder of her solo years proudly cooking meals for family and friends, and even gained regional notoriety for her cookbook, Grandma Jean's Rainy Day Recipes, which raised funds for her local food bank. In addition to volunteering there regularly, she loved "puttering" in her garden, documenting her families ancestry, and celebrating her faith with fellow church members.

Jean is preceded in death by her parents, husband, "Boomer" Dennis, Robert, and Lois. She is survived by Kenneth, Linda, and Don, as well as various nieces and nephews, six grandchildren (Melisa, Justin, Kristina, Erika, Amanda, and Travis), and eight great-grandchildren (Kylie, Taylor, Ava, Tristan, Kiernan, Morgan, Alaia, and Geneva), all of whom will miss her dearly.