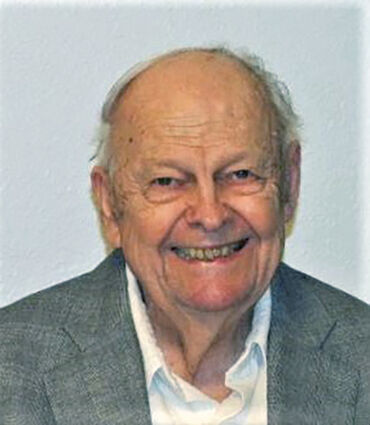 Clarence Oswalt, 95, passed peacefully at home September 19, 2022. He was born in 1927, in Russellville, Arkansas, the eldest son of Clarence W. and Hazel L. (Dollar) Oswalt. He grew up in Russellville and Paris, Arkansas.

Clarence graduated from Paris High School in 1945. The day after graduation the family moved to Bellingham, Washington. He attended Western WA State College in Bellingham. He also worked on Attu and Adak Islands, in Alaska, on military bases as a civilian, between WWII and the Korean War, to obtain finances to further his education at the University of Washington. While at UW, he was affiliated with Alpha Kappa Lambda fraternity, and in the ROTC. Upon graduation he received a BA in business administration. He was a loyal employee for 37 years at Sears Roebuck, in Seattle until his retirement in 1989.

In 1954, Clarence married Myla L. Jacobs in Bellingham, WA. They lived in Issaquah, then moved to Vashon, WA, in 1959, where they raised their three children. They moved to Mason County in 1994. They were married for 59 years.

In addition to his parents, Clarence was predeceased by his wife, Myla, and his brother, Bob. Surviving are his son, Walter Oswalt (Mary) of Vancouver, WA; daughters Clara Lewis (Joe) of Jackson, MS and Hazel Coomes of WA; one sister, Patricia Sims of Orange City, FL; nieces, nephews, cousins and great nieces and nephews.

Clarence placed his faith in Jesus Christ at a young age. Clarence was a faithful member of Vashon Presbyterian Church and then the First Baptist Church, of Shelton, WA. He demonstrated his faith to others with kindness, gentleness, grace and respect. He will be greatly missed by friends and family who knew and loved him.

A Celebration of Life will be held at 11:00a.m. Saturday, Nov. 5th at First Baptist Church, 428 W. Cota St., Shelton, WA 98584. A reception will follow. Interment will be at the Jarrell's Cove Cemetery on Harstine Island.

Those who wish to remember Clarence in a special way, may make gifts in his honor at the Celebration of Life.