Model can be seen at Museum 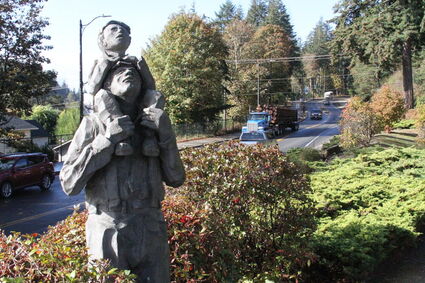 Richard Beyer created more than 90 large sculptures for public places, including this work in front of the Shelton Timberland Library.

Sculptor Richard Beyer created what might be Seattle's most iconic public artwork, "Waiting for the Interurban" in the Fremont neighborhood. The five life-size adults, a baby in arms and a dog are depicted waiting for the electric trolley that used to run between Seattle and Everett, and passerbys bedeck the figures with clothing and signs.

Between 1968 and 2006, Beyer created more than 90 large sculptures for public places, including the "Kissing Couple" on the harbor boardwalk in downtown Olympia. His works also stand outside libraries, including a part man/part coyote figure in Ellensbur...