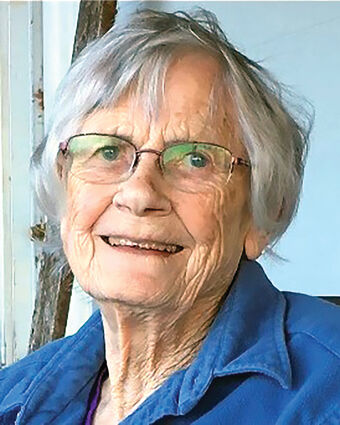 Grace Victoria Wickward, 91, passed away at home in Shelton, Washington on the 26th of August 2022. She was surrounded by family and the view of the lake she loved.

Grace was born in Winnipeg, Manitoba, on the 12th of February 1931, to Frederick Robert Litster and Emma Nott. She was the youngest of five children and grew up feeling like she had lots of "parents." Grace grew up during the Depression. After her father passed away, the family relocated to Victoria, British Columbia. The family moved often and Grace attended seventeen different schools by the time she entered high school.

After completing high school, Grace attended a three-year nurse training program at the Royal Jubilee Hospital in Victoria, BC. There she met her lifelong friend Isabel Milner Perry and they moved to Los Angeles California to work and learn on a Polio Ward. The Polio Vaccine came out and the Polio Ward was shutdown.

Grace and Isabel moved to Seattle and worked at the County Hospital (Harborview) where she worked until she retired in 1988. While attending Trinity Episcopal Church, Grace met Paul Arthur Wickward and they married on the 2nd of August 1958. When asked how they met, she always claimed she won him in a card game! They enjoyed 52 years of marriage when Paul passed away on the 14th of August 2010.They had three children: Sue Holloway, Gordon Wickward (Kathryn) and Nancy Wickward. Four grandchildren: Victoria "Tori" Dausch, Kathryn "Katie" Holloway, Thea Wickward and Paul Wickward, and two grand-puppies Sadie and Luna.

Grace loved spending time with her family and kept in close contact with her family in Canada. Grace did amazing handiwork. She knitted and embroidered beautifully and sewed a lot of our clothes growing up. Her grandchildren remember her baking, particularly tea biscuits and apple pie, and that for years she shunned store bought bread in favor of baking the loaves herself. She loved doing crossword puzzles, Sudoku and picture puzzles. Grace loved her cats and took in any cat that showed up at her door. She is survived by her cat Jasmine.

After moving to Shelton in 1992, Grace served on the Altar Guild at St. David of Wales Episcopal Church, "wowing" the community with her with her extraordinary flower arrangements. Grace loved plants and working in her garden.

Grace was predeceased by her parents and all her siblings: Elaine Shannon (Harold), Mary Hunter (Harry), Frederick "Ted" Litster (Margaret "Peg") and Gordon Litster (June and Blanche). She is survived by her sister-in-law Peg Litster.

The memorial service for Grace will be held on the 24th of September 2022, at St. David of Wales Episcopal Church in Shelton at 2:00 p.m. The service will be in person and live streamed. The Family will host a memorial tea for Grace on the 29th of October 2022, on Vancouver Island at Peg Litster's residence.