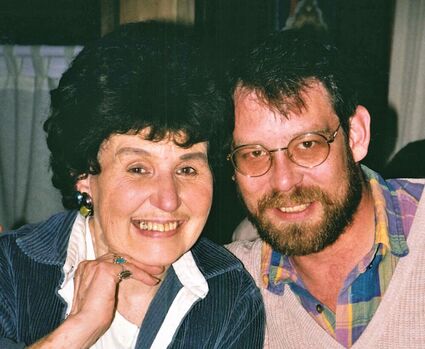 Frances Evelyn Frint, 96, of Shelton WA, passed away on September 2, 2022, at Providence St. Peter Hospital in Olympia, WA. She was born on June 12, 1926, to Joseph Benjamin and Agnes Alberta Malecki in Stettler, Alberta, Canada.

Frances has been a resident of Mason County since 1959. She emigrated with her family from Canada to Woodstock, Illinois, at the age of 15. During her senior year at Harvard High School, Frances worked at the Alamite War Plant in Woodstock, IL; she worked from 4:00 p.m. to midnight, five days a week.

Frances' main job after graduating from high school was at the Lanning Bag & Specialty Co. where she ran the office. Her extra jobs included the Sock Factory and the Alamite Plant.

During WWII, Frances, at the age of 18, moved to Longview, WA with her mother, and brothers. Her main job was at the Personnel Department at Weyerhaeuser Timber Co. Extra jobs included picking green beans, hoeing mint, selling Minnesota Woolens door to door, and working at 24 Flavours Ice Cream Shop. When her brothers, Jim and Robert were drafted into the army during WWII, Frances drove their log truck to finish her log show.

After leaving Weyerhaeuser, her main job was with the P.U.D. in Longview, WA. When she bought a house for her mother and younger brother, Frances raised 100 Leghorn chickens and sold eggs to people at the office and bagged cow manure to sell for fertilizer for flowers. She also took in white shirts to iron and was a seamstress.

On January 25, 1952, Frances married Norman "Joe" Frint. Later, they divorced in 1979. In 1985, Frances met and later married Loren Risher; they spent 37 wonderful years together. Their favorite thing was to be in each other's company. They loved and cared for each other unconditionally.

Frances moved to Mason County in 1959 and owned/co-owned many different restaurants and retail food businesses. Her first restaurant was the Old Mill Restaurant in Hoodsport, WA. Frances also owned the Capital Restaurant in Shelton WA; during that time, Frances took the restaurant back after a business deal fell through, then she and Loren became co-owners, renovated the business and later sold it. Frances and Loren also co-owned the 50's Diner & BBQ House, 5th Street Express, and Purdy Creek Espresso.

Frances and Loren enjoyed going on road trips together. They would go to the Longview, WA area where Frances spent her young adult life. They would occasionally go to Rainier, OR. Frances also enjoyed going up to British Columbia, Canada to Victoria, Nanaimo, and other places on Vancouver Island. Sometimes Loren would haul Christmas trees to Canada and Frances accompanied him.

Another favorite pastime was to attend local fairs with Loren. Frances and Loren would go to Oysterfest, Lakefair, Rainier Days, Mason County Fair and many others. She had a real zest for life and brought that joy to everyone around her.