Stephen Milus Gay, 72, a longtime Shelton resident, Journal employee, musician and living historian, died at Tacoma General Hospital on August 11 after a six-week bout with sepsis and its complications.

He was born July 29, 1950 in Carmel, California, to Henry Guernsey Gay and Fern Wessel Gay when his father was working for the family's weekly newspaper in Monterey. His family made two more stops in the weekly newspaper world, coming north in 1954 for 10 years in Buckley, Pierce County, and then spending a year near Silverdale, Kitsap County, before landing in Shelton in 1966 when his father bought the Shelton-Mason County Journal.

Stephen arrived in Shelton for his last two years in high school and graduated with the Shelton High School Class of 1968. He never left town after that except to attend Concordia College in Portland for a few semesters.

After working as a flyboy -- pressman's assistant -- at the Journal in high school, he ended up at the newspaper for another quarter century, from the early '80s to the mid-'90s as the foreman in charge of the pressroom and physical plant and from the mid-'90s to 2008 as the advertising manager. He retired when the Gay family sold the newspaper in 2008 after 42 years of ownership. Stephen and his brother and sister operated the newspaper after the 1999 death of their father, the editor and publisher for 33 years.

About a year after he returned to Shelton from college, he took a job as the director of the Inn Quest youth center on Hillcrest in 1971, where he met his wife, Wendy Nye. They were married in September 1972, and from 1972 to 1983 he worked for the Nye Company owned by her parents, first with the plastering crew and eventually running the company's lumber yard on Cole Road. They had two boys and were divorced in 1983.

In his elementary-school years, he was trained in classical piano music, but when he became a teenager in the 1960s, he rejected Chopin & Friends and started playing pop and rock tunes by ear. He developed an extensive record collection of 1960s pop music. He joined the Shelton country-rock band Whatever's Fair in 1976 as the keyboardist and played locally with the group about 20 years before it wound down.

In his 30s Stephen started a hobby of living history that would last four decades. On a vacation to an ancestral home in Guernsey, Wyoming, in the mid-'80s, he stopped at the Little Bighorn Battlefield and other historic sites. Intrigued with the Custer story, he developed a keen interest in frontier soldiering, started collecting uniforms and equipment from the era to wear and display and joined the National Indian Wars Association, even changing his Shelton phone number to the year of Custer's Last Stand and regularly traveling to the site of the Battle of Little Bighorn for encampments.

Then he founded the Frontier Soldiers Association, another group that provided living history of the Indian Wars Era of the 1870s at various events around the Northwest and beyond. He annually drove to the Big Hole National Battlefield in Montana on vacations to act as a volunteer interpreter and displayed his knowledge in places as far flung as Fort Bridger, Wyoming, and Walla Walla. His group held regular cavalry drills at a horse ranch in McKenna, Thurston County.

In the '90s he transitioned to another living-history group featuring a period that had fascinated him since he was a boy playing army -- World War II. He was the driving force when a small group of enthusiasts formed Friends of Willie & Joe in 1994, taking the name from editorial cartoonist Bill Mauldin's World War II characters. Stephen even got Mauldin's blessing to use the name and the cartoon soldiers' likeness as a logo.

The group went to parades, memorial ceremonies, veterans and armed-forces events and encampments all over Washington and parts of Oregon. Stephen took the troop truck and jeep he had restored as well as his soldier's equipment. He collected uniforms and equipment and just like during his days in the Frontier Soldiers Association, had an encyclopedic knowledge of his subject gleaned from the books filling his shelves (and in the case of WWII, from talking to veterans). On top of that, he belonged to the West Sound Military Vehicle Preservation Club out of Bremerton, displaying his WWII vehicles wherever that group went.

One of the highlights of his Willie & Joe years was a trip to Normandy in 2019 for the 75th anniversary of the D-Day landings where he attended the June 6 ceremony at the American cemetery above Omaha Beach and participated in a whole week of events and encampments commemorating the fateful day. 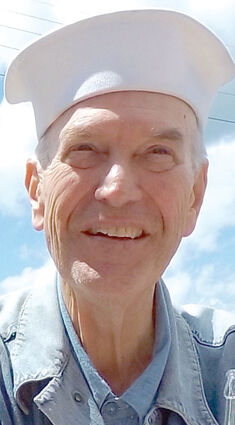 A lover of all ages of vehicles, he also enjoyed keeping his family's 1930 Ford Model A in shape and taking it to parades and classic car shows. He was a member and one-time officer of Shelton's Yesteryear Car Club. He enjoyed more socializing with friends at the Liars Club, a group of old guys who meet at the Taylor Station Restaurant once a month.

Stephen is survived by his sons, Joshua Milus Gay (Le'Anna) of Olympia and Geoffrey Dale Gay (Erin) of Columbus, Ohio, grandchildren Brodie James Gay and Spencer James Gay of Olympia and Hannah Guffrey of Columbus, brother Charles Gay (Mary) of France, sister Julie Orme (Brandt) of Shelton and many others in his extended family.

A memorial is scheduled for 1:00 p.m. Saturday, August 27, at the Olympic Flight Museum, 7637 Old Highway 99 SE, Tumwater (Olympia Regional Airport), to be followed by a reception. Masks are strongly recommended.