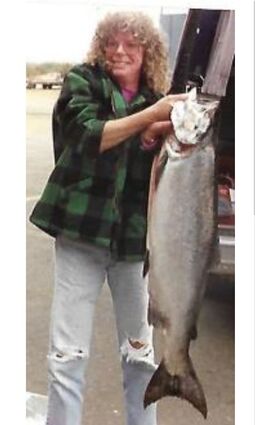 Phy was born in Deer Lodge Montana to Walter Rinderknecht and Evelyn Reistad. She was the oldest of three girls. After graduating from Missoula Sentinel High in 1959, she worked at the radio/TV station KGVO Missoula. The family left Montana for Washington and put down roots in Edmonds. Phy soon followed and got an apartment and began working for the 1962 World's Fair in the Press office. In 1963 Phy married Bernie Migas. Although the marriage ended, they had two wonderful daughters together, Monica and Tauni.

Phy traveled and lived up and down the west coast, settling in Hoodsport, WA, where she built a life for herself with her longtime companion, Terry Testu. Phy loved the saltwater, she enjoyed fishing for salmon, clamming and crabbing. She took pride in their home, was a great cook and enjoyed collecting recipes. Their porch was surrounded by her beautiful collectibles and plantings.

Phy did not want to leave Hoodsport, but did so in 2018 due to health reasons. She eventually came to enjoy her time at Living Court in Enumclaw, WA. Reporting on whether "her mountains were out", the goings on in her meadow and the variety of birds that visited her feeders, specifically, the ducks.

The family offers sincere gratitude to the caring staff at Living Court Assisted Living. We appreciate their kind words, and yes, she was "a hoot."

In Phys honor, please go to the nearest drugstore, purchase a pair of mirrored aviator sunglasses and take yourself out to lunch; maybe a place with a view? Where folks know your name, and Willie is on the jukebox. And that's that.