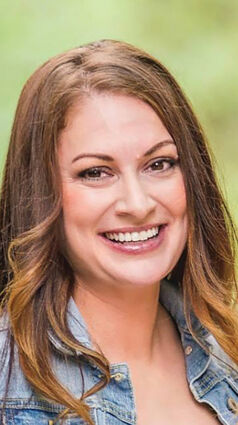 On the 21st anniversary of her father's passing, Amelia Inez Smith was bid to join him. She gave her love to her family one final time, then, with her mother and her best friend beside her, she slipped away in the early hours of the following morning. She was 41 years old, far outlasting the expectations of her doctors. Her life was a testament to the value of laughter, love, and family.

Amelia's childhood was spent building forts among the blackberry bushes and huckleberries, with maple and fir trees dancing overhead and salt air drifting up from Pickering Passage. Born second of five children, they would play baseball and soccer games of two on three, perform Disney plays with their record player, and listen intently as their father read to them at night. Amelia enjoyed summer bike rides, radio flyer wagon rides, and singing Diana Ross and Reba McEntire with her sisters. They continued their closeness as they got older, keeping their roots close to home, becoming real friends, and enjoying Family Night every Friday.

In her elementary years, Amelia had already developed an ability to make everyone feel special. She and a friend once invited their favorite teacher to dinner, hosting the main course at one house then walking a mile down the road to host dessert at the other. She had a penchant for conversation and an eagerness for life. In middle school, she played basketball, volleyball, sang in the choir, and played clarinet in the marching band; PE was her favorite class. She graduated from CHOICE High School in 2000, and received an AA in Accounting Technology from Olympic College in 2004.

She and Emily Wilson-Edge (Hoss) met in the first grade, both motivated readers; what began as a reading rivalry between them, would flourish into a friendship that would last a lifetime. Her most fondly recollected childhood birthday was when they held a tea party in the front lawn and then attended The Phantom of the Opera in Seattle, chaperoned by her father. Weathering many storms together, almost 30 years later Amelia became Godmother to Emily's children.

In her twenties, Amelia became the proud stepmother of Cody Bradley, ever a bright spot in her life. She also took to becoming the favorite Aunt with ease, hosting sleepovers, one-on-one lunches, and saying yes to nearly every one of her nieces' and nephews' requests. She kept a candy jar and a well-stocked snack cupboard specifically for them. She taught them the value of a friendly greeting and a warm goodbye, told them dad jokes, was their confidant, their tutor, reading buddy, and was always available for a snuggle. They were affectionately known as "[her] babies."

In her early thirties she briefly moved to the oil fields of North Dakota where she discovered laughter had a name: Richard Krohn. They met on a blind date, moved back to Washington, and did not part ways until his passing in 2017.

Amelia loved a good power ballad, and spent much of her time belting them out in the car and at karaoke with her family and friends. She read constantly, and loved learning. She was particularly interested in history, including understanding the current cultural landscape in historical context. She loved documentaries and earnest comedy podcasts. Most of all, Amelia loved her mom, and was so grateful for her love and care.

Her ashes will be spread along with her father's, on their family property, amidst the blackberries and huckleberries, beneath the maples and firs, where the salt air drifts up from Pickering Passage.