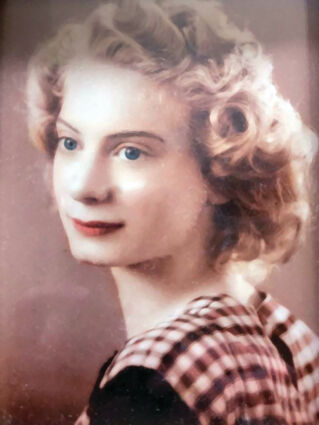 Clarice Joyce (Burns) Renecker was born September 7, 1930 in Erskine, Minnesota. She was the oldest daughter and second oldest child of Dewaine Jay Burns and Ragna Christine (Noer) Burns. A graduate of Flathead High School in Kalispell, Montana, Clarice moved to Seattle, Washington to attend Bible School in 1948. Through mutual friends, she was introduced to the love of her life, Roy B. "Bert" Renecker, and the two tied the knot on December 2, 1950. They made their home in Shelton, Washington, and raised five children.

Clarice and Bert were married for 56 years, until Bert's death on February 2, 2007. During the last few years together, they were able to enjoy several trips abroad, visiting Italy, Norway, Finland, Sweden, and Denmark. Clarice only wished that they had started traveling internationally sooner. She was always excited to visit new places, and Bert was able to make friends wherever they went.

A talented church pianist and organist, an avid gardener (she was especially proud of her roses and raspberries), and an excellent baker and cook, Clarice worked hard all her life. She was a fair-minded woman of great integrity who possessed both a passion for justice and hard-headed common sense. She actively lived out her Christian faith in tangible ways, through deeds of love, acts of generosity, and a deep concern for the welfare of others. Clarice was a devoted wife and mother, and a faithful friend. She will be greatly missed, but her memory is blessed forever.

Clarice died at home on June 2, 2022, at the age of 91. She was preceded in death by her parents, Dewaine and Ragna, brothers Eugene and Robert, her husband, Roy B. Renecker, Jr., and her son-in-law, Les Sjoholm. Surviving family members include her five children: Linda Renecker Sjoholm, Bernice Lawson (Ken), Lyle Renecker (Judy), Jeanette Ogg (Randy), and Angela Renecker; 13 grandchildren, numerous great-grandchildren, two great-great grandchildren (with one more great-great-grandchild on the way), two brothers, Francis and Richard Burns, and one sister, Carol Ann Franklin.

When asked how she wanted to be remembered, she said: "I loved my family." Her legacy of love will continue after her, and we commend her into God's keeping.