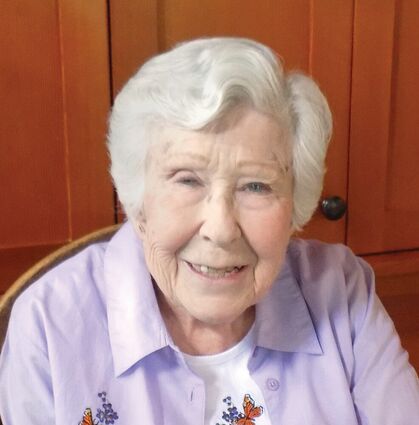 Margo H. Williams of Shelton went to be with her Heavenly Father and Savior for eternity on April 8, 2022. She was 92 and died peacefully in her home. She had lived in Shelton for nearly 54 years. All who knew Margo are invited to a Celebration of Life service on Friday, June 24th, at 2:00 p.m. at First Baptist Church, Fifth & Cota Streets in Shelton.

Ardyne Margo Haney was born on March 18, 1930 in Flint, Michigan, to Ernie Haney and Alice (Williams) Haney. Her older twin sisters were stillborn, and she and her younger sister were raised in Flint, Flushing, Port Huron, and Lexington in Michigan before moving to Berkeley, California when Margo was a teenager. She graduated from Arcata Union High School in northern California in 1948 and attended Humboldt State College in Arcata. Margo came from a musical family and took piano and voice lessons as a child and youth, singing and playing at church. She received a music scholarship for college and would later have opportunities to sing at large venues in southern California, as well as continued soloist and choir ministry in churches.

Margo's family moved to the Los Angeles area in 1949, where in 1950 she met her future husband, Leonard A. Williams, at a church meeting. They were regularly involved in church activities together and were married on May 4, 1952, in Santa Barbara, California. The day before their wedding, Leonard received his draft notice; so most of the first two years of their marriage was spent near Fort Eustis, Virginia, before returning to southern California.

Margo was a homemaker while raising their children in southern California, the San Francisco Bay area, and then Shelton. While family vacationing in Oregon and Washington in 1968, Leonard landed a job at Certified Manufacturing Company (later Certified Aerospace) in Shelton, and the family moved soon after. Prior to her marriage, Margo honed her secretarial skills working for a Los Angeles area stock broker, and she kept the books for a brief time when she and Leonard owned the Union 76 gas station in downtown Shelton. She was an administrative assistant for 19 years in various positions at City of Shelton, retiring in 1992.

Margo enjoyed reading and traveling, as well as boating and swimming at Lake Isabella, where she and Leonard lived for 23 years. She especially loved the ocean, rivers, lakes, and Puget Sound. After retirement, the couple traveled extensively in their motor home throughout the United States and served with SOWERS, providing help to several Christian organizations in the western United States. Margo was usually involved in church ministry, most often as a choir member, greeter, and administrative helper. She was a member of First Baptist Church of Shelton for over 52 years, where she previously participated in the LiveWires senior group. Along with Leonard, she initiated and supported the Mason County Christian School's Bible fund and also contributed to the Billy Graham Evangelistic Association, Samaritan's Purse, and Flying H Youth Ranch.

Margo's Christianity and her family were her top priorities. She and Leonard had a shared style of parenting and believed strongly in teaching their children and grandchildren to love God. She was never happier than when surrounded by all of her extended family and was very proud of their

accomplishments and mutual love for music. Margo will be remembered as a loving and faithful wife and a supportive mother and grandmother who modeled consistency, discipline, perseverance, and commitment to family.

Margo was preceded in death by her husband of 56 years, Leonard, as well as her parents and three sisters. She is survived by her son and daughter-in-law, Len and Jaynee Williams of Shelton; her daughter and son-in-law, Michelle and Ron Merrin of Kent; grandchildren Jonathan Williams (Joanna) of Shelton, Scott Merrin (Laura) of Winchester, California, Jeffrey Wilsor (Dustin) of Seattle, Brad Merrin (Dani) of Lacey, and Lauree Foster (A.J.) of Bremerton; nine great-grandchildren; and a niece, Cynthia Croom of University Place.

In lieu of flowers, memorial donations may be made to Mason County Christian School in Shelton.