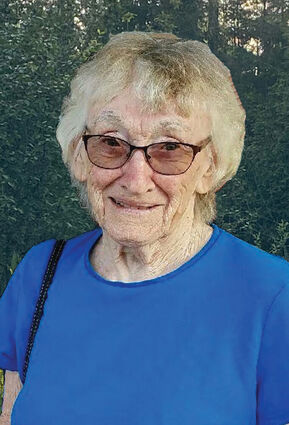 Doris Mae Auseth was born Doris Hovind, on March 5, 1926, in Brinsmade, ND to Alice and Albert Hovind. She died May 26, 2022 in Shelton, WA. With a life spanning 96 years, she had many tales to tell. Her dad farmed a section of land where she was born and raised until drought and the Great Depression directed them to Shelton, Washington.

She went to school at Irene S. Reed High School (now SHS) where she first fell in love with Victor Auseth, a good friend of her only brother Buzz Hovind. She graduated in 1943 and worked at the Bremerton Naval yard until 1945. From 1945-1948 she studied at the Providence Hospital School of Nursing in Seattle under the Army Cadet nursing program, which was designed to address the nationwide nursing shortage. After graduating from nursing school as an RN, she returned to Shelton where she married Victor "Vic" Auseth in October 1949, she always referred to him as the love of her life.

She worked at Shelton General Hospital until January of 1949 until settling into a long career as a primary care office nurse, first with Dr. Linkletter, then Dr. Schumacher, where she took care of patients for over 20 years, and then for Dr. Trucksess. During this time, she was able to take a break from working to have her children, Joan, Linda, and Burt. She retired in 1989 to spend more time with her grandchildren. Even after retirement, Doris was never idle and used her skills to help the community, she volunteered for hospice, she worked at the information desk for Mason General Hospital and helped immunize people through the Mason County Health Department, organized blood pressure checks with the Shelton Senior Center, made lunches for the Kiwanis Club through her church, sorted fabric for Treasures Thrift Store, distributed food for the Food Bank, and led a 4-H Club and worked as the camp nurse. Doris made many quilt tops for her church to distribute for Lutheran World relief. She instilled the love of service in her grandkids, often bringing them along to volunteer with her. She and Vic loved raising their kids and then their grandkids on the shores of Hammersley Inlet. She loved soaking up the sun while planting beautiful flowers in her garden. Toward the end of her life she reflected, "I had a great life married to the man I loved, my kids, my grandkids, and great-grands. And best of all they seem to like me too. What more can a person ask for."

In her 96 years, she amassed a large fan club including her family that will miss her immensely. Doris is survived by her children and their spouses: Joan and Rick Hayes, Linda and Bob Barnhart and Burt and Michele Auseth; her grandchildren and their spouses: Casey and Dawn Hayes, Matt and Amanda Barnhart, Megan and Jake Gould, Melissa and Jester Purtteman, Carrie and Eric Welty, Heather and Emmett Fitch, Ben and Courtney Auseth; her great-grandchildren: Kailey and Miguel Delgado, Trent Gould, Mason Barnhart, Talis Auseth, Gavin Gould, Adi Purtterman, Merrick Auseth, Max Purttemen, Peyton Hayes, Avery, Liam Welty, Ayla Fitch, Riley Welty, Cameron Barnhart, Audrey Auseth, Torben Auseth and Maija Auseth; her great-great-grandchildren Kinsley and Noa Delgado. She is also survived by her many nieces and nephews and their families, including Cindy Hovind, Wendy Hovind Jackson, Ken Olson, Carol Auseth, Sebert and Mike Auseth.