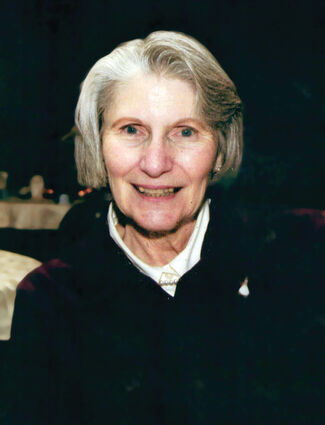 Lifelong Mason County resident Dixie L. Johnston (Aitken) passed away peacefully May 17, 2022, after a long battle with Alzheimer's disease. Born in Port Townsend, Washington in 1934, Dixie spent a happy harmonious childhood in Hoodsport, Washington with her eight siblings in a home bordered by her father's orchards and gardens overlooking the picturesque waters of Hood Canal. Walter, Dub, Lorna Pile, Dixie, Gib, Charlotte Sharpes, Ed, Stan, and CharEll Johnston were a very close knit bunch and the Johnston family home, always full of family and friends, was a constant bee hive buzzing with activity.

As one of the older daughters of Charles and Ruth Johnston she was not just a sister but was also sometimes tasked with the role of assistant mother to the younger family members. Dixie's life at the Johnston family home in Hoodsport held some of her most cherished memories.

As a teenager Dixie cleaned summer cabins at Beacon Point. Later while married and raising four toddlers she worked at the Shelton Hotel as a waitress then as a clerk at Sprouse Reitz Variety store in Evergreen Square. Dixie worked for the Shelton School District starting in the early 60's as a lunchroom/playground supervisor, substitute secretary and teacher's assistant then moving on to teach remedial reading classes and tutoring students until her retirement.

A strong supporter of schools, she campaigned for school levies and was an active member and past president of the Bordeaux Elementary School PTA, as well as a union steward for school employees. Dixie also volunteered to lead troops of Brownies and Girl Scouts for a number of years, teaching them songs, arts & crafts and the outdoors. Being creative and having many hobbies, Dixie enjoyed sharing her skills.

Extended family members, numerous nieces, nephews, and cousins, neighbors and friends may recall the many group excursions to the Pacific Coast to dip ocean smelt and dig razor clams with the evening campfire sing-a-longs being one of Dixie's favorite activities.

It was a belief of the Johnston family that many hands make light work and Dixie's son Brad recollects childhood memories of the Johnston women along with friends and neighbors traveling from home to home to wash windows turning the work into a party. The more the merrier, whether it was berry picking, mopping floors, or canning peaches.

Dixie enjoyed music of all types but was particularly fond of banjo music, especially when performed by her nephew Paul Johnston.

Dixie's overflowing abundance of kindness helped many through troubled times. She always put others needs before her own, the kind of person who would put a sweater on a child because she herself was cold. Thoughtful gestures and appreciative words meant more to Dixie than all Kings' Gold. She encouraged others to do their best and was fiercely loyal to family and friends.

While battling Alzheimer's disease in her twilight years she remained in good spirits. She enjoyed sing-a-longs and was also trivia champion, remembering obscure facts but perhaps forgetting names and faces. Daughter Kim says Dixie also enjoyed the music activities where she lived. She would correct the lyrics in the songbooks and add missing verses. She had a good memory for songs.

A true native of the Pacific Northwest Dixie loved her life on and around Hood Canal so much that one would suspect that salt water ran in her veins. She held dear her family and her values, honesty being the most important. Patient, forgiving, caring, and kind are the words that best describe mom. She spent her time here on earth trying to make life easier for others. Now we pray that things are easier for her. We love you mom.

A gathering will be announced at a later date.