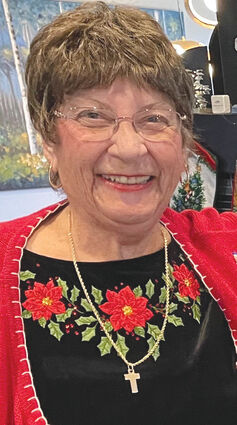 Ann was born in Boston, Massachusetts to Harold and Marie Lambert. Until the age of five, she lived in Forge Village, Massachusetts surrounded by several of her mom's Italian relatives. Her father was in the Navy, so she moved around. Growing up, Ann lived in Massachusetts, California, Illinois, Rhode Island, Virginia and Washington. Ann was 14 when her family moved to Washington State and she has made it her home since.

After graduating from Marysville High School, Ann lived in Bellingham and Sedro Woolley. She worked at a cafe in Sedro Woolley where she met her longtime friend, Joan, who introduced her to Lloyd. Lloyd and Ann were married 62 years this past February, one week after their best friends Rich and Joan Ryan of Spokane, Washington.

Lloyd and Ann moved to Shelton in 1964. Ann worked for the Shelton School District first as the recess "duty" at Mountain View Elementary and later as a paraprofessional at different schools in the district. She loved working with children.

Ann was a wonderful and caring wife, mom, daughter, sister, aunt, cousin and most of all grandma and great grandma. She spoiled and loved her family immensely. She was the best cook and baker and looked forward to all the celebrations with family and friends. She exemplified the role of hostess and everyone who came to Ann's felt welcome and well fed!

In her retirement, Ann and Lloyd enjoyed traveling with friends Joan and Rich and cousins Joe and Janet from Massachusetts and Edward and Marietta from Colorado.

In lieu of flowers you can donate to Virginia Mason Medical Center Oncology department or Providence Saint Peter Hospital.