North Mason will send six athletes, one team to state 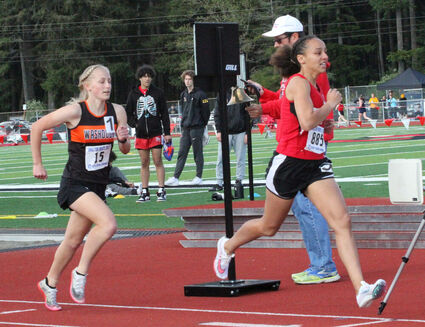 Shelton's Alauna Carstens runs past the bell to signify the final lap in the 1,600-meter race at the 2A District 4 track and field championships at Highclimber Stadium in Shelton on May 20.

Shelton's Alauna Carstens continued her record-breaking senior season, winning the 1,600-meter and 3,200-meter race at the District 4 2A track and field meet Friday at Highclimber Stadium in Shelton.

Ali Clifton was the other Shelton girls athlete to qualify for state, finishing fourth in the 3,200-meter race with a time of 12:08.95.

Jaron Sartori qualified for state by finishing fourth in the high jump with a height of 5 feet, 10 inches.

Sartori will compete in the finals of the high jump at 10:50 a.m. Saturday.

The Bulldogs had six athletes and one relay team qualify for state at the 2A WCD III Championships on May 20 and 21 at North Mason High School in Belfair.

The girls qualified six athletes for state. Addilyn Varick won the javelin with a toss of 108 feet, 10 inches.

Each of the Tupolo sisters qualified for the state meet. Tanza Tupolo earned second in the shot put with a throw of 35 feet, 5.5 inches. Adrianna Tupolo finished third in the discus with a toss of 100 feet, 3 inches. Adrianne Tupolo placed fourth in the triple jump with a leap of 30 feet, 10.25 inches.

The boys 4x100 relay team earned a spot in the state meet. The North Mason team of Trent Petersen, Dakota Filer, Avery Ballein and Alexander Rank finished fifth with a time of 45.05.

The state 2A track and field meet is today, Friday and Saturday at Mount Tahoma High School in Tacoma. Varick will compete in the first event of the meet, throwing in the finals of javelin at 3 p.m. today. 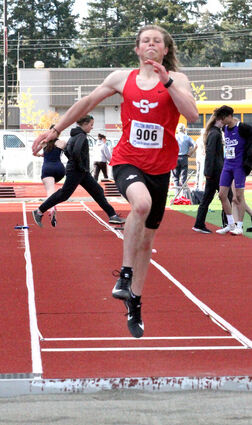 Shelton's Jaron Sartori takes off during the long jump.

Mary M. Knight's Danny Goeders punched his ticket to the state meet in Cheney after finishing sixth in the 800-meter dash at the 1B District Championships on May 19 at Franklin Pierce High School in Tacoma.

Goeders placed sixth in 2:15.78 and will race in the State 1B meet at Eastern Washington University in Cheney. The prelims are at 2:25 p.m. Friday, with Goeders trying to qualify for the finals at 10:30 a.m. Saturday.