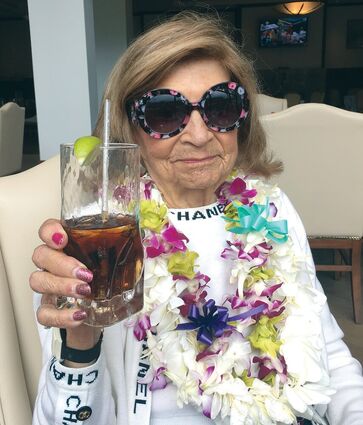 Nadia Marie Hovind peacefully passed away in her sleep at 2:05 a.m. April 28, 2022, in the Moana Valley on the island of Oahu. She was holding her daughter, Wendy's hand. Although she started her next journey from Oahu, she was a dyed-in-the-wool Shelton girl.

Nadia was born on March 29, 1930 in North Bend, Oregon. She attended Bordeaux Elementary along with her closest friend, Terry Skelsey-Roberts (deceased). Nadia was among the Shelton High Graduates in 1947. She worked first at McConkey's Drug soda fountain, and then was promoted to receptionist at Shelton General Hospital. She and Buzz met at a Lake Isabella dance and married when he was home on leave from the Navy 12-26-48. This is a real Shelton fable; they raised a family, built a home on Arcadia, owned a successful business and traveled after retirement.

Nadia was very active in her community and volunteering at Southside School PTA. She and Buzz helped with the carnival and loved the May Day festival, watching their kids dance around the Maypole. Nadia always looked forward to joining Charlene Smith on her trips, whether to Long Acres or the Panama Canal. She was active in the Mount Olive Lutheran Church and with her girls and their years as Rainbow Girls. She contributed her bright enthusiasm to the ShelToa Orthopedic Group. She loved meeting her girlfriends, The Smiths, Terry and others for coffee at Denny's. They claimed their own table and were treated like royalty by the Denny's crew. Nadia worked at the family business, Evergreen Fuel, managing the office during the start-up years.

Everyone who knew Nadia would say she lived BIG! You knew when she entered a room - her laugh, and joy shared with everyone. As a young woman, Nadia was always running, not walking. Run to the car, run into the store, run to the boat. It was like she couldn't wait to jump into adventures. She loved to water-ski, Yes, on one-ski, AND she could beach start. She loved flowers, especially orchids, and her home on Hammersley Inlet where she lived for over 40 years. She spent the summers "raking" the beach, swimming in the "icy" cold waters with her kids, and water-skiing. Buzz and Nadia always had a boat of some kind, and they loved trawling in the San Juans, and being part of the Shelton Yacht Club. They named their favorite boat, a Tollycraft, the "Mahi Mahi". Nadia was always creative, and could make/do anything. She painted a castle on her girls bedroom wall, she sewed school clothes (including coats).. She would appear in the school halls disguised as a witch, cackling and riding about on her broom! (Halloween)! She was colorful and like her husband, she loved cars. The car close to her heart was a yellow Corvette which Buzz sold because she had too many speeding tickets.

Her Grandson Paxton shares, "When I think of my grandma I think of her roaring laughter that was always joined by the slapping of her hand on either her own knees, or yours depending on where you were sitting. She loved to laugh. She loved to make you laugh. Her home always had an open door to my brother and me, and as a teenager I always found my "gram's" house to be a place I could relax and slow my noisy high-school life down to a simpler pace. We would often order burgers and milkshakes to-go, her favorite meal of course, was a good burger and a shake! We would watch all of the classic James Bond movies, play cards, and if I were lucky she might even tell me a story or two about my dad as a kid, or her husband (Buzz Hovind), my grandfather who passed while I was not yet a year old. I could sit and listen to my Gram tell me those stories for hours, even if it was one I had already heard, there was just something so magical about it. I felt such a connection to those stories, and because of her, I did get to know my grandfather, that's something I am so very thankful for to this day. My Gram also taught me about the power of our thoughts, once picking me up early from school on a day I wasn't feeling well, she told me as we drove back to her house "the world is just a reflection of your own self Pax, so if you have a positive outlook, and a kind heart, then our world will be beautiful". It's one of those things that when you are 12 years old you don't think much about "in the moment", now at 28 I find myself thinking about that a lot. She must have known what she was doing. These days I have a beautiful son of my own and a daughter on the way. I can't wait for them to ask me to re-tell a story about my life as a kid with my Gram, so that they can feel that same connection she was able to give me. "Thank you Gram, for everything. All of my love".

Her daughter Wendy shares, "Mom was always SO proud of me, whatever I did. She was my biggest cheerleader. She was a breast cancer survivor, like me. For 67 years, I woke up every day, knowing my Mom was a phone call or short ride, or plane trip away. She spent her last years living "down the road" from us on Oahu. Mom had a love / yearning for Hawaii, as long as I could remember. She and my Dad visited the islands more times than I can count. She LOVED it here! One of our favorite things was to go to the Kailua beach / boat ramp before sunset. It is a local place; a gathering place after the day to hang out, listen to the radio, have a beer, watch the sunset. We also had our favorite restaurants, breakfast at the oldest hotel in the islands, The Moana. We always had the best table, beachside, a glass of champagne and the best view of Waikiki.

Mom had a stunning view of the Ko'olau Mountains and probably saw a rainbow every day. She made a new best friend and added a hanai daughter to her family living here. She wore flowers in her hair, had a lanai filled with orchids, and ate fresh papaya every morning along with her beloved coffee with cream. She found/loved going to two different churches, and continued her love of shopping! I inherited Mom's love of Hawaii. Mom loved...her family, church, her animals, especially her poodle named Mimi, and an adopted feral cat named Skeezix, going to the Goodwill, finding bargains, drinking cokes, strawberry milkshakes (that Wayne always brought to her with a smile), gambling, bingo, James Bond movies, Watching "The Holiday" every Christmas season, sunglasses, traveling, dressing with style, cars, angels, Beanie babies, Shirley Temple dolls, hummingbirds, lions... She made the BEST potato salad ever! Also, a potato pancake that she learned how to make from her Grandma. Mom would always walk us to our car, and put angels all around us. I feel those angels and Mom all around me every day. But I miss her so very, very much."

Plans are being finalized, but please watch the Shelton Journal for a celebration of life to be held at the Mt. Olive Lutheran Church this August. The family requests no flowers, but donations to the Alzheimer's Foundation, https://alzfdn.org/support-us/donate/ or the Mason General Hospital Foundation, 2505 Olympic Hwy North #170, Shelton, WA. 98584.