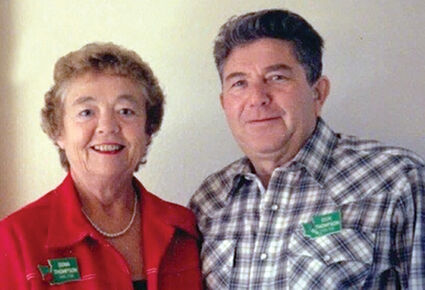 Dona Marguerite (Dahlstrom) Thompson, age 94, passed away on Sunday, April 24, 2022, at the home of her eldest son, Kurt and his wife Leslie (Vander Wegen) in Kirkland, WA where she had lived for just over four years since the death of her husband of 67 years, Dick Thompson.

Dona was born on March 2, 1928, in Conrad, MT to Francis and Austa (Russell) Dahlstrom. She grew up in Montana, except for two years in Tacoma. She spent one year in nurses training then worked for the local telephone company. When her family moved to Sandpoint, ID, she would come over on any weekend she could. One of those weekends, she went to a dance in Naples, ID and met Dick. They were married April 14, 1951 and started out living in Montana. They moved to Sandpoint in 1952, where their four children were born. They moved to Richland in 1960 for Dick's job then moved to Shelton in 1969 due to Dick's new job at PUD #3.

Dona was actively involved at the Shelton United Methodist Church and in Camp Fire Girls. They were actively involved in the Shelton Yacht Club beginning in the late 70's. She worked part-time at Shelton High School for a few years until Dick's retirement. Once retired, their lifestyle turned to traveling. They sold their house, bought a motor home and a houseboat. During the colder months, they would head south and got very acquainted with the southern US and Mexico. During the warmer months, they would park their motorhome and travel around Puget Sound, Salish Sea and up to Alaska on their houseboat. Some of the greatest memories their grandchildren are the times they spent on that boat with their grandparents.

Around 2010, they bought property in Quartzite to settle there. They came up to Washington each summer until they sold their boat, parked their motorhome, and became more involved in the Quartzsite community. They were involved with the Senior Center, the Ham radio club, the Lutheran Church, and the Quartzite Improvement Association. Their home became an entertainment place for many people.

As their health started to decline, their participation in these activities became less and less. When Dick died of a heart attack at age 87, Dona moved to Kirkland to live with Kurt and Leslie. Dona was in the progressive stages of dementia at the time. After just over four years, her body finally gave out and she graduated this life to be with Jesus and all her family members who had gone before her.

There will be no service but a family gathering will be held this summer, at which time both Dona's and Dick's ashes will be scattered in one place they loved, Puget Sound. In lieu of flowers, please make a donation to your favorite charity.