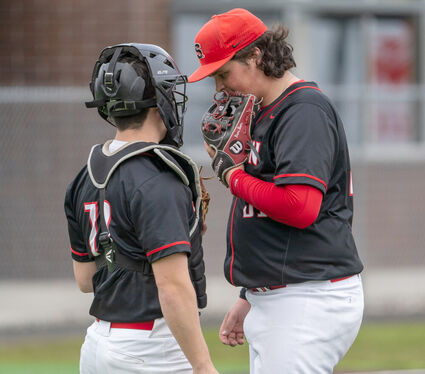 Shelton High School's Brendon Wagner, left, and Brady Rhoades converse on the mound during a recent game against Black Hills at Highclimber Field. The Highclimbers have won 10 straight games heading into the postseason.

The Shelton baseball team finished the regular season Tuesday with a 10-0 win in five innings against Aberdeen, with a game-winning two-RBI double to invoke the 10-run rule and send the Highclimbers into the postseason.

Shelton has been rolling since a 10-0 loss in Rochester on April 5, winning 10 straight games entering the District 4 2A baseball tournament.

"It feels awesome because I have guys all through my lineup that are hitting and it's a different guy every night," Shelton coach Trevor Cahoon told the Journal. "Through those 10 games, it usually doesn't happen in our league and I'm just really proud of the boys for just getting out there and competing every night. A new guy won the game for us each time."

The Highclimbers have clinched second or third in the Evergreen Conference, pending the outcome of W.F. West's final two games of the season.

"It feels terrific, best team for Shelton in a really long time," Shelton senior Tyler Anderson told the Journal. "Excited for playoffs and even more excited for state."

Anderson said the key to the 10-game winning streak was changing at-bats, practicing on the weekends and always keeping a confident mindset.

The Highclimbers are led by a senior class that has been playing together since they were 4 years old, with mixed feelings about their final season together.

"I don't know, it's like, this is my last year," Shelton senior Brendan Wagner told the Journal. "I've been playing with these guys for years and this is my last home game on this field with them. It's an interesting feeling. I don't know how to describe it."

Even with mixed feelings, all the seniors agreed this season has been the most fun of all.

"It's sad at times but if you think about it, it's also exciting," Shelton senior Cannon Hutson said. "This is the final outcome of something we've worked so hard for since we were little so it's really exciting to see it's paying off. It's been really fun, I've enjoyed it a lot."

This senior class had its season canceled in 2020, had a shortened, COVID season in 2021, but has made it to 2022 with a full season and playoffs next.

"It's my second actual season and on varsity, it's my first actual season so it's really nice to finally play a full season of varsity baseball and prepare yourself for bigger and better horizons," Shelton senior Kyle Gerchak told the Journal.

There is another thing that most of the seniors agreed on: Cole Schlender is the funniest player on the team.

Cahoon said the team's strength is pitching, and Shelton will need every arm they have to get through the playoffs and reach the state tournament. He said the team will need to work on having great at-bats going into districts. 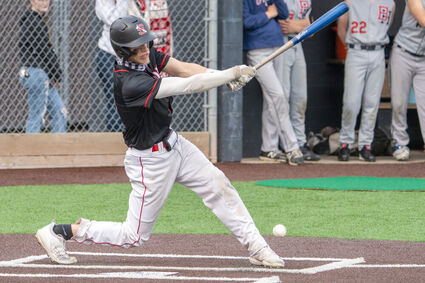 "We're going to face all the pitchers (that) are all going on to colleges and going on to D-I, wherever college they might be going to," Cahoon said. "We're always going to face good arms so they have to understand that bad swings are going to happen and bad at-bats are going to happen and they've got to shake it off and keep coming back and just keep battling. Our pitchers, our defense will stay there for them, so it's just staying balanced up at the plate and just keep attacking."

Some of the seniors are going on to play college baseball, whether it's in Kansas or California. But before that happens, games remain for this team to leave their mark on Highclimber baseball.

"As long as we're good and happy with where we end up, playoffs will be good," Schlender said. "I think we're going to make a run for state this year so I think as soon as we get in there, I think we'll be pretty happy."