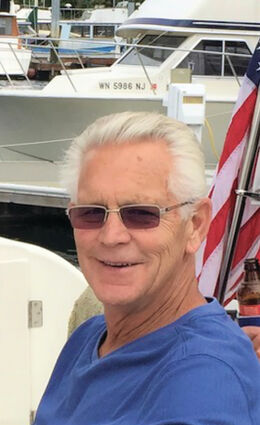 J.L. (John Lloyd) Koch died peacefully on April 8th 2022, at St. Peter's Hospital in Olympia, with his wife, Sue, and sister, Linda by his side.

J.L., named after his two grandfathers, was born in Ashland, Kansas, on May 19th, 1950, to Forrest (Frosty) and Mary Jo Koch. He graduated from Shelton High School in 1968, where he played football, wrestled and played golf. He was a cryptologist for the Army in Vietnam, from 1971 to 1973. After the service, he was a truck driver for several years, living in Oregon and Washington, and in 1995 J.L. bought City Pawn in Olympia, and later opened City Pawn in Shelton.

J.L. had a love affair with Tollycraft boats. Over the years he owned four different Tollys, ranging in size from 26 feet to 43 feet, and they were all beautifully maintained by him. But the real love of his life was his wife, Sue (Steves) Koch. They met in February of 2008 and married in 2009. They were magical together, so full of love and laughter, it made you feel good to be around them.

J.L. was a Lifetime Member of Shelton Yacht Club and a member of the Teamsters. He was preceded in death by his parents, his brother Ron and his stepson, Jeremy Steves.

J.L. will be missed by all for his loving attitude and smiling face.

A Celebration of Life will be held on Sunday, May 8th, at the Shelton Yacht Club, from 2- 5 p.m.