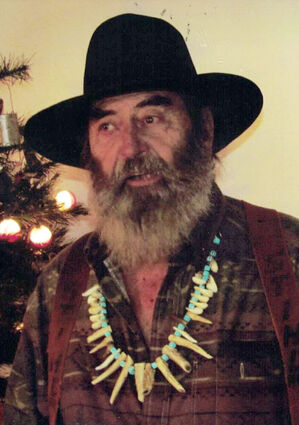 Outdoorsman, paratrooper, scoutmaster, biker, father, and teller of tall tales that "you wouldn't believe", has reached his happy hunting ground at age 95.

Born in 1926 to Donald and Dorothy (Sawyer) Aitken in Wanblee, SD. Bob and his younger brother Rolly rode a horse to school on the Pine Ridge Indian Reservation before his family moved to Shelton, Washington.

As a boy he worked many jobs from setting pins in the local bowling alley to setting chokers in the woods as well as commercial fishing in Alaska. Bob graduated from Irene S. Reed High School and enlisted in the U.S Army in 1944. He served his country as a paratrooper with the 517th and the 505th parachute infantry regiments from 1944 to 1947. He achieved the rank of Staff Sergeant and also volunteered for ‘Task Force Frigid’ that tested men and equipment in sub zero temperatures in Alaska. Bob worked in the timber industry in a variety of jobs and retired from Simpson Timber Co. in 1985 as a millwright. He spent most of his time fishing, hunting, and riding motorcycles until he wore himself out from having too much fun, if there is such a thing. Many would agree that outdoor author and humorist Pat McManus' ancient woodsman character Rancid Crab-tree was most likely modeled after Bob. He loved the outdoors, despised fancy clothing and felt more at home outside than in. Friends and neighbors of Bob were often presented with a full stringer of trout or a hindquarter of venison for their dinner tables.

Bob was also a scoutmaster for Hoodsport's Troop 11 for many years. He led boys through the Olympics and along the Pacific Coast on numerous hikes and camping trips. He was very proud of his troop and the many fine citizens and eagle scouts that he and longtime hunting partner Mick Simmons of Hoodsport guided through the ranks of scouting. There were never two men better suited to teach boys the skills of a woodsman than Bob and Mick.

A motorcycle enthusiast from an early age and a founding member of the Shelton Trailblazers M/C, Bob was a 65 year charter life member of the American Motorcycle Association. He served as a referee at racing events for a long stretch of time. Hill climbing, flat tracking, trials, enduros, hare scrambles and drag racing, Bob did it all. He rode Poker runs well into his 80's and was always pleased with his oldest rider trophies. He was well known to the motorcycling community in several states. He loved his last bike, an Illusion Blue Goldwing and he rode back to South Dakota several times. A friend is someone who knows you and likes you anyway and that is how many thought of Bob. He was truly loyal to friends and family no matter what.

Bob married Mildred Scott in 1948. They divorced in 1950. He married Dixie Johnston in 1953 ending in divorce after 25 years. There were six children from these marriages, Janet Aitken, twins Kimberly Behrends (Rick) and Kenneth Aitken, twins Roberta Cornwell (John) and Brad Aitken (Cindy) and Carol Glenn. Kenneth, Roberta, John, and Carol preceded him in death.

A rough looking fellow, you may recall seeing Bob around town in a hickory shirt and stagged off work trousers with his signature elk tooth and antler necklace. A revolver was ever present on his hip along with a skinning knife sharp enough to split a hair. Many saw Bob as a man from another time, perhaps born a hundred years too late.

Close your eyes and picture if you can a content solitary figure rowing slowly and silently in a tiny boat on a smooth as glass lake at the break of dawn patiently waiting for the big one to bite and his reel to sing and that would be our dad, Bob.

“Rest easy Dad. You had a long and fun-filled life. You will be missed but never forgotten.”

A gathering will be announced at a later date.