Teacher's last school gig will be at Forest Festival 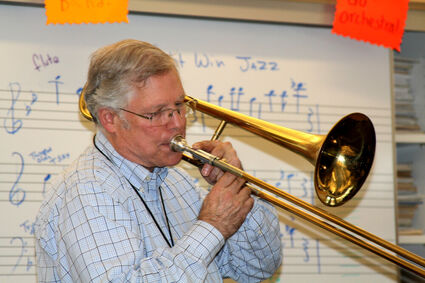 Stan Yantis, a trumpet player for 56 years, also demonstrates his skills on trombone and flute during the rehearsal Monday of the school's sixth-grade band. The longtime music teacher at Hawkins Middle School is retiring in June.

Stan Yantis is laying down his baton in June after teaching music to Hawkins Middle School students for 39 years.

That doesn't mean North Mason's music man will be packing his trumpet into its case. He'll continue to perform with local bands The Windjammers and Swing Fever, and then he'll start his part-time job as the instrument manager for the marching band at his alma mater, the University of Washington.

For a couple more months, Yantis will instruct fifth-grade students in the mornings before class, then teach three band classes and three orchestra classes.