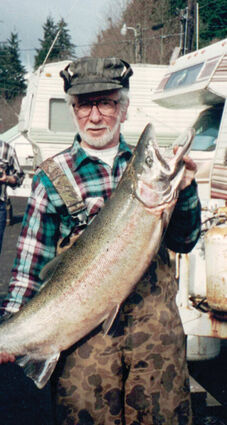 It is with great sorrow, and joy that we announce the passing of a great man, husband, father, grandfather, great, great-great grandfather, and friend.

The sorrow for the loss of a man that has truly left his blessed mark on all who knew him, and the joy for all who were blessed by his presence! His life was lived for hunting, fishing, spending time with family and friends, maybe not in that order! Ha! Ha!

William R. Morgan left us on March 1, 2022. He was born in Shelton on September 8th, 1930, to Barney and Margaret Morgan who preceded him in death, as did his brother Larry Morgan.

Bill served in the US Army as a cook for Squad; he was in the infantry and built an airstrip where he was stationed 20 miles outside Seoul, Korea. When he returned home to Shelton, he resumed work at the Rainier Power Plant (Simpson Timber Co.) as the Chief Engineer where he worked until retirement.