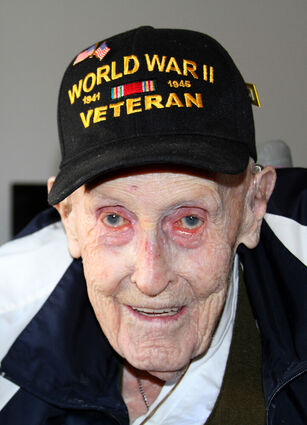 Pinky Neuharth celebrated his 100th birthday on Monday, Valentine's Day. The Seattle native has lived in Mason County since 1983 and now lives at Maple Glen Senior Living in Shelton.

Pinky Neuharth turned 100 years old on Valentine's Day, with his thoughts on his late wife, Gladys, who died four years ago.

Her ashes are in a box on a shelf, next to a rose, in his room at Maple Glen Senior Living in Shelton. Neuharth - who was born in Seattle on Feb. 14, 1922 - said he plans to be cremated upon his death and have his ashes mixed with Gladys'. They will be released into the north fork of the Skokomish River and drift together into Lake Cushman, where they lived full time following retirement in 1983.

Neuharth shows a visitor "two really good things" from his century of life. One is a trophy for achieving the low net score in a March of Dimes golf tournament in 1952. The other is a photo of the couple.

"We had 61 glorious years of marriage," he said.

Neuharth grew up on Queen Anne Hill in Seattle, the youngest of two boys. His father was a mechanic for Seattle Transit, his mother a homemaker.

After graduating from Queen Anne High School, Neuharth worked in the offices at the Seattle-Tacoma Shipyards. When the United States entered World War II, he was drafted into the Army. He spent the war years stateside, performing office work in New Orleans, Kelly Field in San Antonio and finally Wisconsin. He returned to Seattle in 1947.

Neuharth was working in a beverage store when a woman walked in seeking to cash a check – she was a friend of the owner.

"I took one look at her and said to myself, 'I'm going after that!'" he recalled.

Neuharth called Gladys and asked her out on a date. Before she relented, she called his boss and asked whether Neuharth had been married. At age 34, he had not.

"She was good looking," he said of the initial attraction. "She was low on food. We went to the grocery store and I bought $100 in groceries." Then she cooked him chicken. "When she feed me that chicken, that was it, then and there."

Their first date was in January, and he proposed on the last day of February. They were married May 17, 1956.

Along with Gladys's 2-year-old daughter, the trio lived on a half-acre outside Seattle. After working in a wire rope factory, Neuharth drove buses in Seattle for 23 years.

"I've been shot at, cussed at, spit at and told I was a number-one driver," he said with a laugh over receiving the one-finger salute. 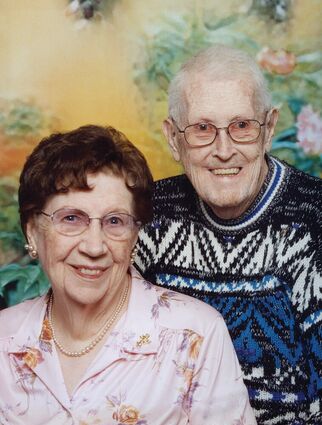 Pinky and Gladys Neuharth were married 61 years, until her death in 2018. He turned 100 on Monday.

The family bought property near Lake Cushman in 1974, and built a house with "all volunteer" help, Neuharth said. "We built it for retirement," he said. "We wanted to get out of Seattle."

The couple moved full time to Cushman in 1983. They were living in Maple Glen when Gladys died in April 2018.

"We had so much fun together," he said. "I taught her how to fish, and then she caught all the fish."

These days, Neuharth enjoys crossword puzzles and watches golf on TV; by the time he retired from the sport, he had a handicap of three. He listens to country music on the radio and enjoys tunes by Kenny Rogers.

Neuharth said he doesn't know any relative who made it to age 100.

"I never thought I'd reach that far."