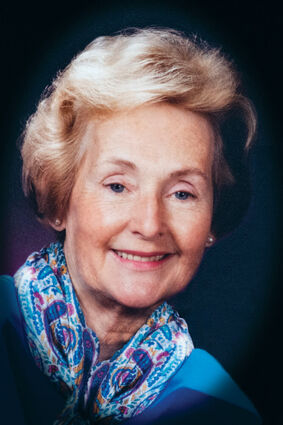 After a full life of family, friends, travel, books, and bridge, on November 13, 2021, Carol Lorraine (Bruce) Salzer passed away peacefully at the Mason Lake home she loved. She was 92.

Carol was the fifth of seven children. She was born in Pendleton, OR, on August 13, 1929, to James Curtis Bruce and Unicie (Grinstead) Bruce. She grew up in Pasco, WA, where her father ran a grocery store.

In 1943 her family moved to Walla Walla, WA. Carol graduated from Walla Walla High School in 1947. Carol attended Whitman College, where she pledged the Tri-Delta sorority and belonged to Phi Beta Kappa. In 1951, Carol graduated "cum laude" from Whitman College, with highest honors in English. Shortly after graduation, Carol wed fellow Whitman alumnus Allen George Salzer of Hoquiam, WA. Together they raised four children: Kathryn (Robert Hunter, deceased), Thomas (Janis Otwell), Sandra (Christopher Cook) and Eric (Heidi Edeen). They were married for 65 years, until Allen's death in 2016. Carol and Allen lived in Boise and Lewiston, ID, Spokane, Des Moines and Grapeview, WA. In Spokane, Carol joined the League of Women Voters and (with Allen) was a founding member of the Northwood Presbyterian Church.

Carol channeled her love of reading and language into teaching. She taught secondary English and reading improvement in the West Valley, Auburn and Federal Way school districts before retiring with Allen to Mason Lake in Grapeview. At Mason Lake, Carol and Allen made many friends when they joined the Mason Benson Center. Carol volunteered on several committees but was most proud of helping the club start a scholarship fund for graduating seniors who had attended the Grapeview School. Carol was also an avid bridge player and joined several bridge groups in the Mason County area.

Carol is survived by her four children, nine grandchildren, and six great grandchildren. She is preceded in death by her parents and her six siblings: LeRoy, Darrel, Joyce, Patty Ann, William, and Rosemary (Hayes).

To honor Carol's wishes, a service will not be held at this time. The family requests remembrances be made in the form of contributions to your local food bank or the Leukemia & Lymphoma Society® (LLS), P.O. Box 102488, Pasadena, CA 91189-2488.