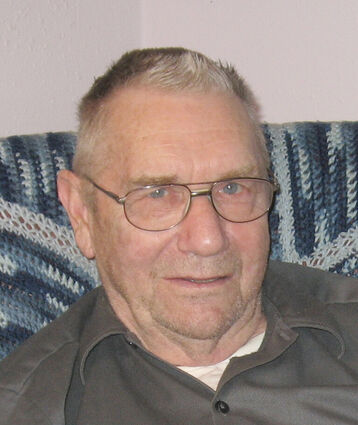 Wayne Charles Evers passed on January 19, 2022, at the age of 95. Wayne was born August 25, 1926, at home in Matlock, Washington, to Edward and Grace Evers, joining a sister, Hazel, and a brother, Gene, all of whom have preceded him in death.

He learned to fish, hunt and log at his father's side, loving to spend time outside.

He was drafted into the Army in January of 1945, and served in South Korea and Okinawa before being honorably discharged in November of 1946. He spent most of his army time in the motor pool, maintaining equipment and teaching non-farm boys how to drive.

He married Barbara Myers on September 8, 1948. They moved to Chicago for a year so Wayne could use his GI bill to attend Chicago Technical Institute to become a machinist. Their first child, Alberta, was born there in 1950.

They returned to the Shelton area, purchasing 27 acres four miles out of Shelton. He cleared enough to park their trailer and improved the property by building a house bit by bit.

Wayne again worked with his father logging and then worked for Simpson then moved the family to Mary M Knight School grounds where he worked for eight years as the bus mechanic, bus driver and auto mechanics teacher.

They moved back to the Shelton property when he quit working at the school and shared ownership of Evers Texaco with his brother Gene for a few years. He sold his interest in the station to his brother and went to work for Les Fields Auto Parts where he worked for 17 years as a parts man and machinist. He completed his work years at Western Parts and Machine, retiring in 1991.

An avid fisherman, most of the month of June each year was spent camping at Horn Lake in British Columbia. Longer trips to Alaska, driving the Alcan Highway, were done about every other year. He loved the outdoors.

Never one to sit around, Wayne always had a project going. He loved his old caterpillars and spent a lot of time fixing them so he could finish his project, which was often cutting trees for sale or stove wood.

Wayne will be remembered for his quick sense of humor and willingness to reach out to anyone needing anything.