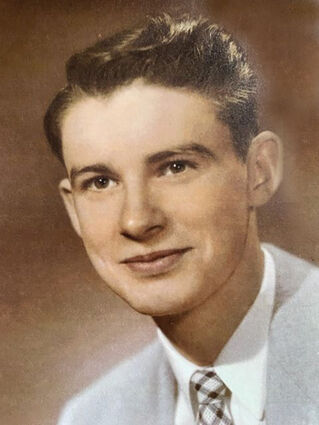 Patrick Henry Getty, age 84, passed away on November 9th, 2021, ending his battle with dementia. He is back in the arms of his beloved Joy, his wife of 42 years.

Pat was born to David and Violet Getty in Shelton in 1937. He was named after his grandfather who immigrated to the Shelton area from Ontario, Canada. He was the youngest of two older brothers, John Getty and Calvin Getty. The boys were known around town as the "Getty boys". John passed away unexpectedly in 1997, and Cal sadly passed away very shortly after Pat on November 26th, 2021.

Pat graduated from Irene S. Reed high school in Shelton in 1955 and attended WWU. Pat remained active with his High School classmates throughout the years and he and Joy traveled to Shelton for most, if not all reunions and gatherings until very recently. He was known as a wonderful pal and encourager to all his classmates. Pat was a big part of this groups' school spirit throughout the early years and beyond and was a groomsman in his dear friend Roy's wedding, who he grew up with since kindergarten. Roy was also a groomsman in Pat's first wedding when he married Phyllis Linton in 1958. Pat and Phyllis raised four children together in the Seattle area until their divorce in 1979.

Pat cared deeply about family history and traditions. He and his brother Cal bought and took care of the "Getty House" in Shelton where Getty families continued to live. He and Cal also bought a gravestone for their grandmother, Elizabeth Sarah Johnstone (Violet's mother) who died young at the age of 27 from a horse and buggy accident in 1915. The gravesite is at the Lopez Union Cemetery on Lopez Island, Washington.

Pat worked at a variety of professions including owning the Dairy Queen in Shelton in the early 60's and trying his hand at construction work in Alaska. Back in Seattle he began a long career in carpet and floor covering sales. His work took him to all parts of the Pacific Northwest where his charismatic personality and fun-loving ways earned him great success in sales as well as many friends. He worked hard, he was joyful, kind, and grateful.

In 1979, Pat met and married Joy Land, and they moved to the Camaloch Golf community on Camano Island where they built 2 beautiful homes together. Pat was a passionate golfer and loved to host his family and friends for golfing get-togethers, and even turned it official by hosting the "Pat Getty Open" for several years running at the Camaloch Golf course where he put on a "competitive" golf match for friends and colleagues; his daughters catering the events. Pat and Joy hosted and attended countless family reunions both on the Getty side as well as Land. Family was everything to them and they travelled across the country several times to meet up with distant relatives. Pat and Joy shared 42 loving years together where they golfed, entertained, travelled, and enjoyed an amazing circle of friends both in the community and church.

Pat had an easy-going way about him, and he enjoyed making people happy and helping out in any way he could. He was an active and grateful member of his church where he and Joy volunteered at the food bank and many other events. Along with golfing, Pat also enjoyed gardening, crabbing, and beautifying his home. But nothing made him happier than when his family was around...the kids, grand-kids, and great grandkids. Pat was a wonderful and loving Dad was the doting Papa and Grandpa who showed up to all the school functions, graduations, baseball games, karate tournaments, band performances and piano recitals, near and far. He loved to celebrate all the birthdays and milestones, and he dressed up as Santa at Christmastime and sang in the church choir. Pat was kind, joyful and funny, and always had a smile or a funny quip for everyone. He will be dearly missed.

Pat is preceded in death by his daughter, Michelle Getty (2003) and his wife Joy Getty (January 2021) and is survived by his children and their families: Lisa and Wade Jackson, Erin and DeVante Botello and Joe and Stevie, Jolynn and Eric Carpenter and Dylan, Maria and Jason Getty and Jacob, Chris and Betty Huddleson, Amy and Travis Hurdlow and Gracelyn, Jordan and Savannah, Sarah McGrath and Emma.

Special thanks to his caregivers at the Mill Creek Cottages; Shelly, Lexi, Tammy and Kathy and everyone else who loved and put up with him.

A celebration of life for both Pat and Joy will be held at a later date at the Camano Chapel. Contact the Chapel for further details.