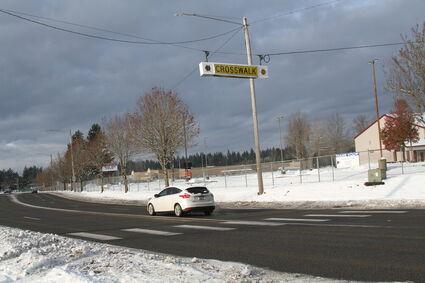 The City of Shelton's Road Safety Plan, which focuses on sites where fatal and serious accidents have happened, includes a recommendation to create a midblock pedestrian crossing on East Wallace Kneeland Boulevard next to Oakland Bay Junior High School.

The Shelton City Council will pursue federal money to improve the safety on some of its most dangerous roads, which include the East Wallace Kneeland Boulevard business corridor and the North 13th Street/Shelton Springs Road intersection.

The council Jan. 4 gave preliminary approval to a Road Safety Plan. The council can vote to give the plan final approval at its Tuesday meeting.

The city report states that if the council had declined to adopt the plan, the city would have missed out on the opportunity to apply for a share of $35 million of federal Highway Safety Improvement Program money in 2023 that the state will distribute. March 4 is the deadline to apply, and the council will decide which projects to request money.

If the city receives some of the federal money, it will be required to put up 10% in matching money in its 2024 budget.

The plan focuses on fatal and serious injury crashes.

"The local Road Safety Plan is a crash data-driven plan that tells us around town where people are getting hurt and where we have fender benders," City Engineer Ken Gill told the council at the Jan. 4 meeting.

The city paid SCJ Alliance of Lacey $30,000 to prepare the safety plan based on crash data provided by the city for a five-year period from 2016 to 2020. Those numbers came from the state Department of Transportation, which compiled all the crash reports in the city reported by law enforcement. Crashes on U.S. Highway 101 through the city were not included.

During that five-year period, 832 crashes were

reported on Shelton streets. Two of those crashes resulted in deaths, and 14 caused serious injuries.

Of those 16 serious accidents, four occurred on state Route 3 within the city limits, three were on Olympic Highway North, and nine occurred on other streets.

The city corridors with the highest number of accidents from 2016 and 2020 were:

■ Olympic Highway South, from the city limits to Mill Street, 51.

The report also noted 38 crashes from 2016 to 2020 that involved pedestrians and bicyclists, which it noted is an unusually high number.

At a Sept. 24 study session on the plan, council members identified other areas where they have seen "near misses" and asked staff to focus on those areas as well. That prompted the additional recommendation for a mid-block pedestrian crossing island on East Wallace Kneeland Boulevard next to Oakland Bay Junior High School.

Council member Eric Onisko, who was chosen as the city's mayor Jan. 4, has been recommending a better crosswalk for the Oakland Bay students for years. He said he is excited about a possible upgrade, "where kids are playing (the arcade game) Frogger with cars."

"The crosswalk flashers are great, better than waiting for the light to change," she said.