Remains a rogue at heart in series 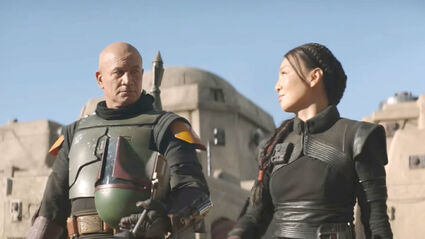 Boba Fett (Temuera Morrison) and Fennec Shand (Ming-Na Wen) take stock of their situation on Tatooine in "The Book of Boba Fett."

Is it possible to evolve (or retain) a social conscience while remaining an unrepentant criminal?

Gangster fables have contemplated that question for generations, with "The Godfather," "Pulp Fiction," "The Sopranos" and "Breaking Bad" serving as some of the more notable examples.

And while the answer has been "no" in all the aforementioned examples, none of those tales have been set in a world as lawless as Tatooine, where there aren't even any cops to bribe.

It's no exaggeration to describe former bounty hunter Boba Fett as a lifelong criminal, since as the clone "son" of Jango Fett, he was "born a crime," to borrow a phrase from Trevor Noah of "The Daily Show."

Worse yet, Boba was orphaned when Jango was killed by the Jedi, who were acting as self-appointed agents of law and order for the Republic, while also being totally unaccountable to the same.

That Boba wound up in a profession that skirts the boundaries of the law (at best) was no accident. Even when he accepted assignments from the Empire, he had no qualms about mouthing off to Darth Vader when there was a possibility that the carbonite freezing process meant he might not collect his bounty from Jabba the Hutt for bringing in Han Solo.

In short, it was never in the cards for Boba Fett to become a law-abiding citizen. A lifetime of getting kicked in the teeth by people wielding legally sanctioned power over him ensured that he would never respect those in authority, even when he conditionally did their bidding.

Boba Fett became the lone-wolf operator we saw in the original trilogy of "Star Wars," and where that got him was knocked into the belly of the Sarlacc and left for dead in "Return of the Jedi."

And now, after his guest-starring appearances in "The Mandalorian," Boba is back in "The Book of Boba Fett," and after two episodes of his own streaming series on Disney+, we've seen how he freed himself from the Sarlacc, how he came to be treated as an equal member of a Tusken tribe that initially took him in as a slave laborer, and how he and his spry assassin henchwoman, Fennec Shand, are attempting to take control of what was once Jabba's criminal empire.

In "The Mandalorian," we saw how Boba took Fennec in after she'd been left for dead in the desert, mirroring his own rescue by the Tuskens, and what's great about how Ming-Na Wen plays Fennec Shand is that she's essentially a more savvy, but also more impulsive, version of who Boba used to be. She is absolutely ready to throw down against anyone at any time, no matter how badly they might appear to have her outmatched.

Temuera Morrison as Boba Fett is a different story. Not only has his time spent stewing in the stomach of the Sarlacc clearly left him with some lingering physical ailments, but it also seems to have affected a significant shift in his outlook.

Boba remains a rogue at heart, but from the moment he first gains a measure of acceptance by the Tuskens, he seeks to learn their ways, and even organizes them to fight back against hostile interlopers in their territory.

We see that a man who almost died alone, unmourned and unloved, has opened himself up to a culture that's completely alien to him, in the hopes of gaining ... what? A family? A tribal identity? A home? Neither the show nor Morrison's performance have revealed that yet.

Likewise, as an aspiring crime boss, what's remarkably well-rendered is how much Boba Fett, former lone-wolf bounty hunter, is catastrophically terrible at the "organized" part of "organized crime" thus far. Boba has sound instincts for riding herd over a relatively small crew, but as someone whose previous relationships were 100% transactional, a neat detail is how much Boba relies on Fennec to be his social translator, helping him keep straight the complex web of all the competing players and their possible motives.

In the words of Peter Capaldi as the Twelfth Doctor in "Doctor Who," "She's my carer. She cares, so I don't have to."

One of the biggest mysteries is not only why Boba Fett even wants the hassle of becoming the new crime lord that everyone else is bound to take shots at, but also why he's trying to be so merciful in the position.

Even after his post-Sarlacc shift in perspective, Boba has no compunction about being brutal when he believes it's warranted, and one reason I don't mind him removing his helmet so often is because Temuera Morrison's facial expressions of almost feral rage are terrifying when he administers a beat-down.

And yet, this is the same Boba Fett who insists to Fennec Shand that he'd rather rule by respect than fear, even when she correctly points out that fear is a far easier and more effective motivator in a beyond-Wild West environment like Tatooine.

If all Boba Fett wanted was fortune, or even power, then there are much quicker, simpler ways to obtain those goals, so what is our former lone wolf really after? Is he trying to build a better order within a world of innate lawlessness, and if so, for what reasons?

Whatever ends Boba Fett is working toward, watching him claw and grasp his way toward them is as fascinating as watching a coyote learn how to walk like a man.

Points to "The Book of Boba Fett" for assembling such a talented, attractive and ethnically diverse cast out of older actors, since Temuera Morrison (61), Ming-Na Wen (Mulan is now 58) and Jennifer Beals (yes! The gal from "Flashdance" is also 58) as Twi'lek cantina owner Garsa Fwip could all pass for at least a dozen years younger, and none of them have slowed down a step as performers.

Also, speaking as someone who professionally couldn't have cared less about the Tuskens before this show, it's impressive how richly "The Book of Boba Fett" has depicted the Tuskens as real people, with their own rituals and traditions and struggles worthy of our empathy.