Four sworn in to council 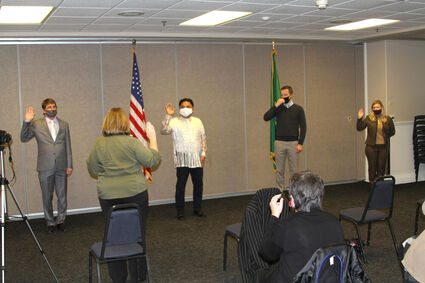 On Tuesday evening, City Clerk Donna Nault swears in new and returning Shelton City Council members, from left, Eric Onisko, Miguel Gutierrez, Joe Schmit and Sharon Schirman in the Shelton Civic Center before the start of the regular meeting. Onisko was selected as the new mayor.

On Tuesday evening, four members of the Shelton City Council were sworn in for new terms.

Eric Onisko and Joe Schmit are beginning their second four-year terms. Onisko ran unopposed as council member No. 4 in the Nov. 2 general election, while Schmit defeated Tyler "Mad Dog" Elliott to return as member No. 6.

Onisko owns two local gas stations and serves on the emergency food and shelter committee, the emergency planning committee, and the Mason County Housing and Behavioral Health Advisory Board. He is also chairman of the city's Shelton Metropolitan Park District.

Schmit, the technical service and operations officer for construction for the state Department of Transportation, is the MACECOM 911 dispatch centerboard chairman, vice chair for the Mason County Economic Development Council, a member of the grants committee for the Community Foundation, and an advisory board member for the Shelton YMCA.

Sharon Schirman ran unopposed to begin her first term as member No. 3. She is the majority owner of ISH PNW in downtown Shelton.

Miguel Gutierrez beat George W. Blush by five votes to be member No. 7. He had to wait a month for the results following a recount.

Gutierrez was sworn in Dec. 7, with Megan Fleiss stepping aside because she had been appointed to the position to replace Bob Rogers, who stepped down because of personal matters.

Schmit was then elected deputy mayor. After he received the first four votes, the majority required, the voting stopped.