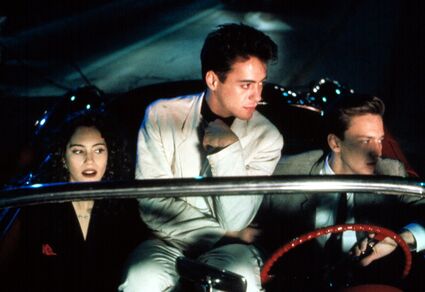 From left, Jami Gertz, Robert Downey Jr. and Andrew McCarthy cope with the winter blues in "Less Than Zero."

The new year is almost upon us, and you are pretty much done with holiday spirit. You need a palate cleanser to wash the taste of holly-jolly cheer out of your mouth.

Just as "Die Hard" is the seasonal 1980s action film that actually embodies the spirit of Christmas, "Less Than Zero" is the '80s drama that's also set during Christmas but runs absolutely counter to the spirit of the holiday.

The 1987 film is based on Bret Easton Ellis' 1985 debut novel of the same name. It is practically the Disney cartoon version when compared with the Brothers Grimm original, but the movie is still satisfy...