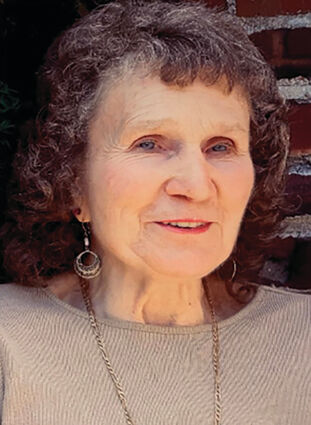 Ann Olli passed away on December 9, 2021. She was born in Yakima on August 1, 1933 and she spent some of her younger years there but it was the time of her early childhood, between five and six years old, when she was at her grandparents farm that she recalled with the greatest fondness. That farm, which sits in Shelton Valley (and once belonged to James Shelton), is where she helped her grandmother with the chickens and watched her grandfather milking cows by hand in the big old barn next to some very large trees. That barn which was built in 1887 and still stands today is now designated on the Heritage Register of Barns and the oldest of the five huge fir trees is estimated to be about 800 years old.

As with many people Ann's life led to marriage (Don Olli) and children (Dawn Fralick, Larry Olli, Julie Whaley) and it took her here and there, living in many houses some in Shelton (where her children were born) but mostly around Port Angeles. Ann was comfortable living in Port Angeles and the family planned to stay there but when her aunt decided to sell the farm in Shelton Valley (which at one point they had run as Kimble's Dairy) it was a done deal; Ann and family returned to Shelton and she was once again on the 60 acre family farm she had so loved as a child.

For anyone who knew Ann they will tell you that she was all about her farm. She would work tirelessly as she raised beef cattle and had a variety of other animals over the years from ducks and geese to horses, yaks and a mule. She loved everything about being on the farm as she enjoyed gardening (vegetables and a few flowers), raising raspberries and blueberries, putting in hay and she maintained her huge lawn that took 5-6 hours to mow every few days. Once the workday was "done," she would go to her job as a janitor for Simpson. After she retired from 20 years at Simpson she volunteered to sit in the Tollie as a visitor guide for the Chamber of Commerce, she waited tables at the Ming Tree in the evenings and for a time she ran Restful Farm, a bed and breakfast, on the farm. Her other great pleasure was riding her horse and she was thrilled when she got to take several pack trips up into the North Cascades and Olympics.

Ann was an active member of St. David of Wales Episcopalian Church. She served her church as a member of the vestry, handled preparation of communion and when the church did lunches for Shelton Rotary she prepared all of the desserts and was a server every week. For many years she held the annual church picnic on the farm in the yard, by the pond, under the huge trees. They were an anticipated event enjoyed by all and she loved making them happen.

The 53 years that have passed since Ann and her family came back to Shelton full time, were some of the happiest of her life. She was well known in the area as a hard-working person who loved her family and farm, cared about the people of this town and did what she could to try to make things better for others.

She is survived by her three children and three grandchildren.