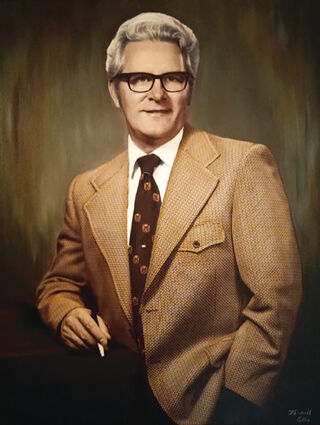 George Mark Johannessen passed away at 6:30 p.m. on December 6, 2021, while receiving Hospice Care at the Lacey Memory Care facility in Lacey, WA.

"Mark" was born in Klo, Norway in 1929. He was the oldest child of seven born to Trygve & Haldis Johannessen.

Mark immigrated to the US in 1948. In New Jersey he studied American History and English. Mark liked to travel and headed west to California where he became a Naturalized US Citizen in 1950.

In California, Mark met Elizabeth "Betty" Kostiv who became his devoted wife of 67 years. Together they sponsored and helped his parents and siblings emigrate from Norway to the US. Mark and Betty had two children, Keith and Kim. They raised their children in Anaheim, CA.

In California, Mark began his career in Law Enforcement with the Covina Police Dept. He advanced his career by joining the LA County Sheriff's Dept. Mark was promoted and became a Lieutenant Investigator with the LA County District Attorney's Office.

Mark was successful in Real Estate, as an agent and broker, as well as a developer in building and remodeling homes and apartments in Grays Harbor County, WA. Mark and Betty retired to Mason County.

Mark was a devoted husband and father. He relished taking his family on trips and cruises. Mark loved sailing, camping, fishing and to travel. He frequently traveled to Norway and Costa Rica. Mark was an avid reader. He loved his wife, his family, and was proud to be of service to his community.

Mark is survived by his wife, Betty and their two children Keith and Kim. Dad will be missed and was dearly loved by his family. "Vi Elsker Deg, Far".