McCallister was known for his jokes and pranks 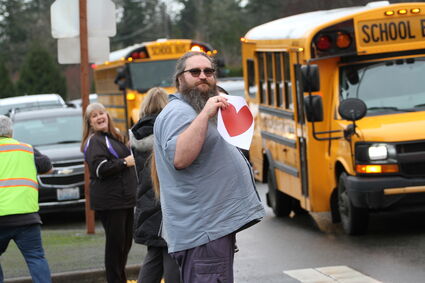 Karl Kangas, the bookkeeper for the bus garage, shares his feelings for James McCallister as the buses Friday pass Olympic Middle School and Mountain View Elementary.

Among the Mason County school bus drivers, James L. McCallister was known as a joker and prankster who was great with kids and took new drivers under his wing.

COVID claimed the life of the 58-year-old Elma resident on Dec. 4, leaving a hole at the Mason County Transportation Cooperative bus barn across the street from Shelton High School.

On Friday, the bus drivers paid tribute to their fallen co-worker with a parade of buses that filed past the schools in the Shelton School District. McCallister was known for wearing bandanas on his head, and his colleagues wore them in his honor.