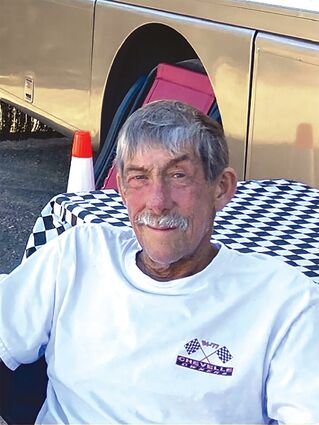 Mark was born and raised in Shelton. He lived his life his way, and died his way. He had a love of cars, mostly Chevrolets but enjoyed all makes. He was an artist in his profession of auto body repair for 45 years. If you were lucky enough to have a car he worked on, you know how good he was! Mark was a "legend" when it came to anything automotive.

He loved all motor sports but had a passion for drag racing. He started racing in the late 70's and continued until his son Corey was old enough to race. Mark would race occasionally off and on but mostly he would support Corey's racing. He loved camping at the racetrack and seeing his race friends. He loved car shows and going to 'Rod Run to the End of the World' in Long Beach, WA, every year.

Mark will be missed by many; he was a true friend and loved deeply. He had a laugh and a smile that was infectious. Mark made an impact on everyone and anyone he met. Family and friends were very important to him.

There will be a celebration of life later when the weather is warmer, and the hot rods can come out for a cruise.