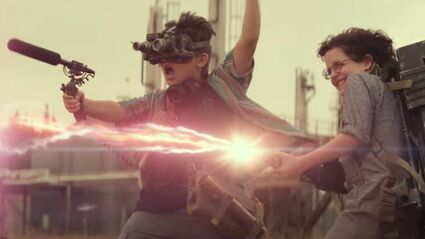 Logan Kim and Mckenna Grace take the original team's equipment out for a test-drive in "Ghostbusters: Afterlife."

The last time we got an attempted big-screen resurrection of the "Ghostbusters" franchise, back in 2016, online trolls started review-bombing it for sexist reasons before the film even premiered in theaters, because director Paul Feig had the temerity to cast all four members of the team as women.

This was unfair and unhelpful, because while the film did not deserve such abuse, neither was it actually any good, but the online trolls undermined their own cause by ensuring any substantive criticisms of the film's slipshod script or lifelessly gratuitous gags would be lumped in with the sexist...