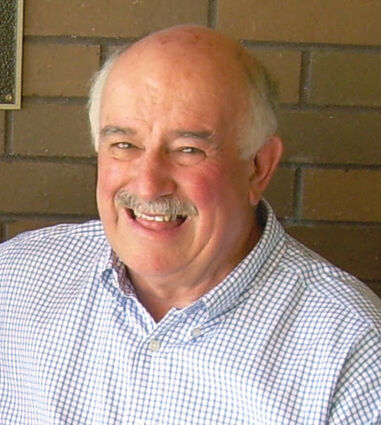 Hugh Wallace Ewart, "Wally," died on Thursday, November 11, 2021, after a long and happy life. Born in Decatur, Illinois in 1939, he graduated from Decatur High School in 1957. Wally graduated from Trinity College in Hartford, Connecticut in 1961, having attended as an Illinois Scholar. He then earned a PhD in chemistry at Yale University in 1966. While in graduate school, Wally married Joanna Vallentine. He then completed a year-long postdoctoral fellowship in chemistry at the University of Southampton in Southampton, England. That year Wally and Joanna travelled throughout England, Europe and the Soviet Union in their beloved red Sunbeam Alpine.

Wally and Joanna moved to Shelton, Washington in 1968, where he worked in the research lab at ITT Rayonier exploring innovative applications and uses of tree pulp. Wally's first child, Mandy, was born in 1968. His second child, Hugh, was born in 1970.

The Ewarts moved to Selah, Washington in 1981, as Wally started work at Tree Top Apple Juice Company directing its research program in a role that involved bringing home for family input innumerable samples of fruit-blended beverages and frozen desserts, many of which never made it to market. While at Tree Top and subsequently with the Northwest Horticultural Council, he led federal advocacy efforts on behalf of the tree fruit industry to ensure its survival amidst numerous threats. These efforts led him to win "Apple Man of the Year" award. Wally transitioned from apples to oranges and spent his last working years at the California Citrus Quality Council.

Wally will be remembered fondly as a man whose optimism and smile lit up every room he entered. His love of food, wine, travel, and outdoor natural beauty was unparalleled. Wally traveled to countries in six of the globe's seven continents (missing only Antarctica), enthusiastically soaking in the cuisine, culture, and sights. He logged over one million miles throughout his lifetime of air travel.

Celebrating with others and recognizing major milestones of family members and friends he held nearest and dearest were always high priorities for Wally. He went out of his way to attend myriad sporting and musical events of his children and grandchildren. Wally leaves a legacy of warmth, love, human connection and the ability to meet people wherever they are. He is survived by his wife, his two children, and four grandchildren.