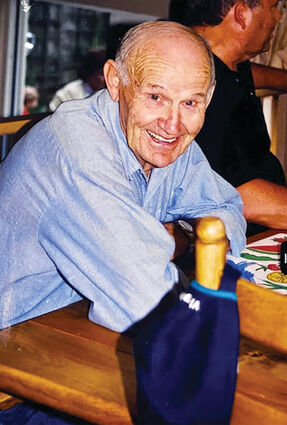 Geral was born at home in Utica, Montana to Russell and Cora Rodgers. He lived in Shelton since 1942. He passed away at St. Joseph's Hospital in Bellingham in his sleep. In 1944, he married June Chesley, raised two sons, Jerry and Jim and lived on Island Lake for 62 years.

During WWII, he joined the army landing in France then walked with his unit to Germany to liberate the Nazi death camp Ohrdruf. His brothers and he owned Rodgers' Brothers' Garage for 20 years, then worked at Rayonier and retired from PUD in 1977. Geral was active in the local VFW and spent time in his garage building things and repairing cars. He enjoyed daily walks/talks around Island Lake and became known as the "Mayor of Island Lake".

A celebration of his life will be held, Saturday, November 20th at 11:00 at First Baptist of Shelton. Please come with your stories of this multi-talented veteran and admired long-time Shelton resident.