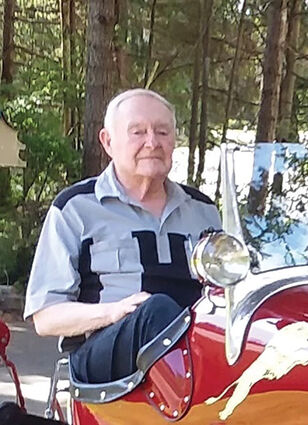 John and his family moved to Edmonds, WA, in 1966, when he was hired to head up the newly launched marketing arm of the Downtown Seattle Association (DSA), then known as Central Association.

He was best known for his achievements as President and CEO of the DSA, to which he was appointed on January 1, 1970, serving in that position until his retirement in January 1995. During his leadership role at DSA, downtown experienced a major office building boom, completion of the Washington State Convention Center on air rights over the freeway, the King Dome, the Seattle Aquarium located on the downtown waterfront and the realization of Seattle's underground transit tunnel. The DSA, under John's leadership, played a major role in those and many other projects and planning issues that set the groundwork for the growth downtown experienced in the subsequent decades. John was also a past Chairman for the International Downtown Association in Washington D.C.

In addition to building a strong base for downtown Seattle growth, he was proud of his role in organizing, funding and launching the non-profit Seattle Housing Resources Group in 1980. Today, that organization (renamed Bellwether Housing) is providing thousands of units of affordable housing for low-income individuals and families. Among those, "The Gilmore," an apartment building located on the corner of Third and Pine Streets, was named after John, in honor of his work on behalf of that organization.

Prior to moving his family to Edmonds, he became a Certified Shopping Center Manager and managed a regional shopping center in southern California. Earlier, he was in the newspaper business working for the San Diego Union Tribune and later as a partner and general manager of The Star News, a chain of weekly newspapers covering Chula Vista, National City, Imperial Beach and all areas south of San Diego.

One of the reasons John and his family moved to the Pacific Northwest was their love of the outdoors. Hunting and fishing opportunities were strong attractions for them. After retiring in Shelton, he found more time to pursue his hobby of collecting and touring antique and collectible automobiles. He served as president of the Yesteryear Car Club of Shelton as well as the Olympic Vintage Automobile Club of Bremerton. While serving as president of both clubs, he initiated the annual "Teddy Bear Drive" to provide stuffed animals for children entering the emergency rooms of both Mason General Hospital in Shelton and Harrison Hospital (now St. Michael Medical Center) in Silverdale.

John's real pride and joy were his strong family bonds and close loving relationships. His wife of 68 years, Marilyn, preceded him in death in 2019. He is survived by his three children (and their spouses), daughter Susan Mills (John) of Snohomish, sons Larry Gilmore (Kristine) of Seattle and Robert Gilmore (Melanie) of Bremerton. John is also survived by five grandchildren, Kelli, Brianna, John Markus, Sara and Hannah, and four great-grandchildren, Taylor, Ayla, Nora and Isaac.