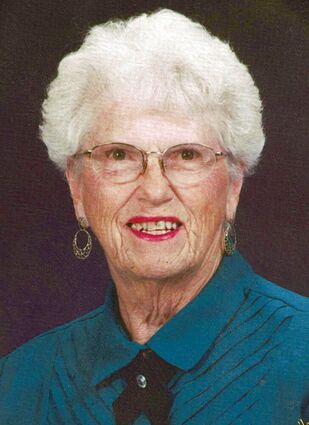 Inez Carol Hybholt, 94 died October 10, 2021 with her family by her side in Shelton Washington.

She was born January 15, 1927 to Victor and Caroline Granum. She had an older sister Adair and they lived in the Seattle area.

Her dad worked for Firestone Tire Company. He was able to keep his job during the Great Depression. Because of many pay cuts they lost their house. They bought a small piece of land in Bothell Washington. Friends and neighbors helped cut trees and dynamite the stumps. They had a shell of a house for many years until they were able to finish the inside. Her mom was a homemaker and was involved in many community events.

Some of her fondest memories as a teen were her junior year in high school when they moved to Sundre, Alberta Canada for a year while her dad worked on the Alcan Highway in Alaska. They stayed with her mom's relatives and Inez loved meeting and spending time with her cousins who all lived on farms.

Inez graduated from Bothell High School in 1945. She went to University of Washington for two years, then met Roger Carlson and soon they were married. They had a son, Eric Lee Carlson. With great sadness Roger passed away from cancer when Eric was only two years old.

Inez went to work for Pacific Northwest Bell from 1950 to 1984. She met Orla Hybholt at a dance and they married in 1955. Orla was an immigrant from Denmark and had worked in Canada as a logger. He learned English on his own and went to school to learn welding. He and Inez had two children Julie Ann and Chris Orla. She was very involved with the Lake City Presbyterian Church where she was a deacon.

After retiring from Pacific Northwest Bell, she became a worldwide traveler. Her travels included China, Ireland, Panama, Chile, Norway, Mexico, Bahamas, Denmark and in her 70s she and a friend did a walking tour in Switzerland and surrounding areas using only a backpack and staying in hostels. In 1991 she bought a 32ft RV and a car she could tow. She joined a singles traveling group called Loners on Wheels. She made many, many good friends and memories. She traveled the United States, went to Minnesota and investigated her family heritage. She really enjoyed learning about her past history. She would park her RV at Eric's and spend a few weeks with them each summer and then to Chris's house for a few weeks. In the winter she would travel to Arizona with her group. Julie lived in Arizona at the time so they would also get a good visit from Inez. Inez had sold her house and lived in her RV for 20 years. For her 80th birthday she took her whole family on a Mexican cruise. When she was 82, she retired her RV and lived in the little Mother-in-law house behind Julie, where she enjoyed her children, grandchildren and great grandchildren.

She is survived by her two sons Eric Carlson and Chris Hybholt, and daughter Julie Scott along with seven grandchildren and 10 great grandchildren. Inez would like everyone to know that she loved Jesus and hopes all will see His love for them.