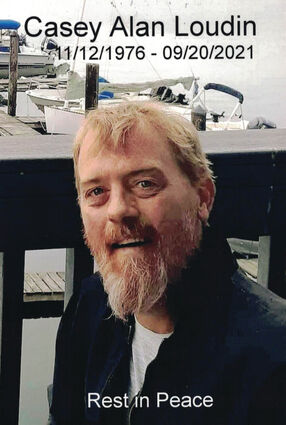 Casey attended Grade school in Olalla where he played baseball, South Kitsap Middle school, and North Mason High School where he played football and had many friends. He joined the Marines after graduation, and was stationed in Kaneohe Bay Hawaii. Casey always took the time to show respects to other military men, asking where they served and listened to their stories. Once a Marine always a Marine. Casey loved cars, fast and loud. A welder he specialized in exhaust systems. He worked for Bucky's mufflers, Les Schwab tires and many years at Canal Automotive in Belfair. He was always willing to lend a hand, look under a hood, never hesitated to climb under a car for work, friends or strangers alike. Casey was preceded in death by his Grand fathers Tom Loudin Sr. And Keith Webb, Uncle Mike Sharp, Aunts Kristine Webb and Chi Webb and cousin David Stalker. Casey is survived by his Daughter Isabelle Loudin Shelton, his parents Chet and Debbie Loudin of Belfair. His Sister Jennifer Loudin, and niece's Kiley Loudin and Kirra Hagan of Belfair. Grandmothers Esther Webb and Donna Loudin , Coeurdalene. Uncles and Aunts Mike and Jill Loudin, Pat and Laurie Loudin of Belfair ,Tom Jr, and Mark Loudin of Post Falls Diane and Bruce Smith, Coeurdalene Richard Webb and Dan Webb Coeurdalene Andrea Sharp Louisville, Barbara and Les Stalker, Indiana, and 19 first cousins . Casey was loved and will be missed. He was laid to rest at Twin Firs Cemetery in Belfair, with an Honor guard and Taps a Celebration of life was held at N M Eagles on October 2nd, 2021.