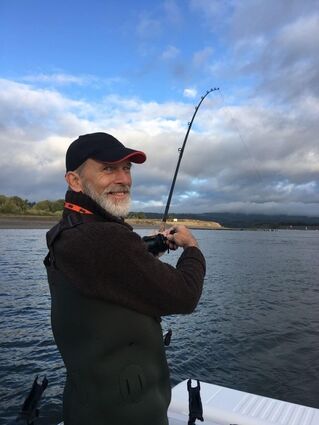 Daniel James Porter, 64 of Shelton passed away in his home after a 4-year battle with cancer.

Dan was born in Auburn, WA, on September 1, 1957 to Janet Darlene (Stone) and Willis James Porter. He was welcomed to the family by his sister Rita and later joined by his baby brother Michael. He resided in Des Moines Washington until 1971 and moved with his family to Honolulu, Hawaii where he taught himself how to surf. He graduated from McKinley High School, Honolulu Hawaii in 1975. After he graduated high school, he hopped on a fishing boat in Hilo, Hawaii and made his way through the Panama Canal, settling in New Orleans. When he was done adventuring there, he moved to Washington where he opened an auto rebuild shop in Riverton, Washington. Dan finally settled in Shelton where he met the love of his life, after 24 years the two were married September 15, 2021 at their home.

Dan was an avid fisherman his whole life, his favorite pastime was boating. Dan was a great captain on any boat he got his hands on. He was a man of many traits, from an all-around handy man, concrete worker, and construction worker to a flagger. Dan retired to fight his courageous battle with cancer, he would not let it keep him down and he continued to help others, continued enjoying his family and hobbies. He was not a man to sit around and do nothing. He enjoyed spending time with family and helping anyone who needed a hand. Family and friends knew if they were unable to fix something, they could call on Dan, he would always know just what was needed. Dan loved the outdoors and loved being on the water, he loved taking anyone on any of his many boats throughout the years, he struggled telling the grandkids "no" when asked to go tubing, they always knew grandpa would say "yes". Dan will be missed tremendously; we know he left this life knowing he was loved by many.