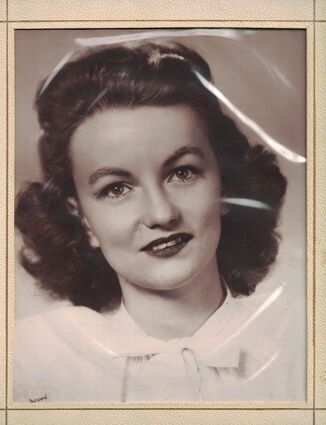 Betty was born on August 15, 1924, to Leonard E. "Lefty" Attwood and Ethel Victoria "Vickie" Neame in Tacoma, WA. She was the eldest of three daughters. The family spent a brief period of time in Steilacoom, WA, where her father was a pitcher for the semi-pro baseball team, the Tacoma Giants.

Her family relocated to Shelton where she and her sisters were raised in their home on Eleanor Street. Betty attended Bordeaux Elementary and Shelton Jr. and Senior High School, graduating in 1942. Following high school, Betty attended and graduated from the Olympia Business College and began her career in accounting.

During WW II, Betty volunteered to staff a Lookout Tower down the street from her home where she would count and identify any and all aircraft. In 1945, Betty met her soon-to-be husband, Byron "Barney" McClanahan and they married on August 25, 1946, at the United Methodist Church. In 1948, Betty and Barney moved to Spokane so he could attend law school at Gonzaga University.Sons Byron Jr. and Neil were born in Spokane. The family returned to Shelton where their youngest son, Joseph "Joe", was born. They purchased a home on Euclid Street where Betty would remain until her death, with much help from her family.

In the late 1950's and early 1960's Betty entered the world of politics by running and being elected to the Shelton School Board where she was instrumental in passing school bonds and the subsequent construction of the Shelton High School Angle Building in downtown Shelton. Later, Betty worked as the accountant for Neil's Pharmacy and she and Neil Evander would work together for 20+ years until they both retired in 1985.

Betty was known for her gorgeous knitting, especially her baby sweaters with matching hats and booties. Some she donated to the St. David's Episcopal Church Gift Shop, and countless others she gave away. Aside from her knitting (including afghans, sweaters and SeaHawks hats) she will be remembered for her delicious baking – especially cookies, her famous apple pies and "big" bread. Her potato salad, (which had no recipe), was the best. In her later years, Betty lived for her beloved grandchildren and great grandchildren. She and her late husband left a legacy for their heirs in vacation properties on Hood Canal and in Gray's Harbor County that have and will be enjoyed for many years to come.

Betty was preceded in death by her parents, her son Thomas, who died at birth, her sister Alice "Tye" Attwood, and her husband of 67 years, Barney. She is survived by her sister Judy (husband Jim) of Bainbridge Island, sons Byron (Tonia) in Olympia, Joe (Laurie) in Shelton, and Neil (Sandra) of Tumwater, and many grandchildren and great grandchildren.