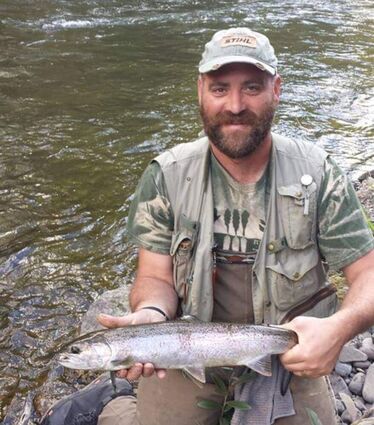 Brian Louis Omdahl, left this life on Thursday, September 9, 2021. Brian was born February 5, 1977 in Oceanside, CA. His parents, Max and Vikki Omdahl, moved to Shelton, WA in 1979. He has lived in Shelton his entire life. Brian attended Pioneer School from kindergarten thru eighth grade and made lifelong friends. He then moved on to Shelton High School and graduated in 1995. After high school, he went to work for Taylor Shellfish on the mussel crew. He learned how to weld and had a knack for it. He worked for Taylor's for 26 years and was the Director of Maintenance and Fabrication.

On October 20, 2005, Brian was introduced to a teacher at Pioneer School. Her name was Autumn Sheldon and they quickly fell in love and have been together ever since. Brian and Autumn married on October 20, 2013. Their love story is something to admire. If you knew Brian, you knew Autumn and vice versa. They were truly two halves that came together to create one whole.

Fishing was Brian's favorite hobby. He has been an avid fisherman since he was a child. Salmon, steelhead, and kokanee - those were his favorites to fish for. He had a few very good fishing buddies that he really enjoyed fishing with. He also loved Mama Kitty, smoking and curing meat, foraging, cooking (especially shellfish, Nordic style foods and other unique recipes), reading, researching, photography and spending time with his family.

There will be a celebration of life on Saturday, September 25th at the Castle and Coleman Shop (1800 W Highland Rd, Shelton) starting at 1:00 pm. All that knew and loved Brian are welcome. Please dress according to the weather as this will be mostly outside.

Any donations can be sent to Steamboat Animal Hospital for anyone unable to pay for the care of their beloved pets.